Missing the mark.
Shawn drawing a line in the sand for Rafe in respect to Molly and TJ’s relationship might have been the most immature thing than anything else on the show this week, if not for the fact that Milo thought it was okay to delete messages from Sabrina’s phone. Sure, he’s a gangster, but that is not what viewers have become accustom to when they think of Magic Milo. This is something Britt would do if it was Patrick receiving calls from Sabrina. Don’t go there with Milo.

Another miss this week was the appearance of Richard Simmons. I don’t remember him as being quite the troublemaker. His visit had nothing to do with the joy and cheer he advertised when he walked into the Metro Court Ballroom and introduced a cheesy song exploiting Port Charles' secrets. It was reminiscent of the music played at the disco the night Laura was attacked. I’m hoping they don’t market that awful song for sale. Two books is enough already, although I wouldn’t mind sampling some Pickle-Lila. Tell us if you remember one of Richard's partners in gossip crime in the GH Poll: I Heard It From.

Just plain missing.
Lucky is greatly missed in this storyline. There are a lot of characters who could return and be a part of this installment of the Luke and Laura saga but who could be more important than Lucky at this point?

All is not lost.
For all the faults this week, it was hard to overlook what worked the most, Laura leaving Scotty behind and running off to join Luke in the hunt for Lulu was expected. More enjoyable to watch was when she tore Luke a new one for jeopardizing Nikolas' life for Lulu's. There was nothing more exciting than watching Helena getting her chains rattled when Laura told her Nikolas had been shot. Oh, the plot thickens.

Find out what charity Finola Hughes and Jason Thompson will be on Who Wants To Be A Millionaire for. There’s still a number of characters returning to GH for the 50th Anniversary celebration. 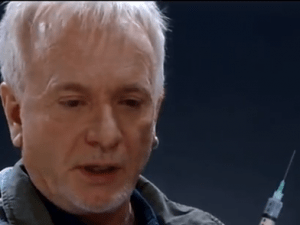 Credit: You can have your ball. (ABC)

This week the show accelerated into the fast lane turning into a bit of a trilogy of terror. The Haunted Star turned up on the list of things missing from Port Charles along with Lulu, Nikolas was shot and was unable to tell Luke what he knew about Lulu, and Britt was making plans with her evil mother, Dr. Obrecht, while trying to avoid contact with her father. Pleasantly for this viewer, the mysteries just kept piling up.

Evil is as evil does.
The biggest mystery outside of who kidnapped Lulu and shot Nikolas was who is Britt’s father and what was her and her mother planning for Dr. Patrick Drake? Also, what does Nikolas know? “GH” seems to be pulling out all the stops in these major storylines leading up to the Nurses’ Ball and it is hard to not want to watch. It seems like Helena or Jerry Jacks is just too easy of an answer for all the suspense invading Port Charles. Even after Luke and Laura confronted Helena, we still don’t know if she has Lulu and it is clear she had nothing to do with Nikolas getting shot.

Unrequited love.
The show was not without its dull or annoying moments. The tiresome back and forth of Patrick thinking about Sabrina or Felix and Liz coaching Sabrina and Patrick about the other has hopefully run its course. Unfortunately viewers will probably have a few more episodes of this until Robin returns…if she returns. More tiresome was Felix pouting over Sabrina hooking up with Milo for all of 30 seconds, I mean really, that relationship isn’t even out of the gate, oh, wait, more importantly Milo isn’t even gay. Did Carly really need to spell that out to Felix?

Unrequited love of children.
Here’s an area that needs some serious consideration. Some people in this world don’t want kids; it’s their right to choose that lifestyle. This is not something that goes away over time. It is hard to tell if “GH” is working a PSA here as they have on other issues, or if they just want to free Spin up for Maxie. Whatever the case may be, they would do well to tread lightly on this issue. It was impressive so far to have both Tracy and AJ support Ellie and Spin respectively. Each has someone in their court and the advice stand your ground is the only way for the couple to sort this issue out. If they both don’t take a stance, then someone will get hurt later by falsely believing if you love someone enough, they will change to accommodate you.