An historic love-triangle.
Just what we've been waiting for. I could smell the buttered popcorn I used to eat after school each day while watching "GH" during the better part of the Luke and Laura saga. They don't make love-triangles like this anymore. It took the better part of a day for Scott to bump into Lucy and plan a shot-gun wedding in hopes that Laura would not find out about Luke's freedom from Anna. Meanwhile, we couldn't wait for the news to come out. It was shocking when she actually decided to marry him again after that. He's always been controlling, even before their first marriage. Love him or hate him, one can't help but feel for Scott always ending up the underdog losing to Spencer. Strike that, if you're Luke, there's no feelings for Scott, which is probably why it took Lulu less time than Lucy's coup with Scott to talk her father into stopping the wedding.

Now that's event planning.
Lucy Coe has been flitting through Port Charles since the mayor set her free and since then, has single-handedly scored funding for the Nurses' Ball from an anonymous donor and planned a wedding in about an hour. She had better things to do like counsel Kevin on being a better husband, because he really should support her entrepreneurial interests in matchmaking now that she has given up vampire slaying. Maybe she should run for mayor.

Grandparents, a sonogram, and a bear...oh my!
Regrettably the Falconeri's didn't call Lucy to plan their little soiree and it was an event that went south fast. Olivia had another crazy vision that hyped up the moment. Was there going to be an explosion? Or, would Scotty and Laura tie the knot at 7:00 PM before Luke made it to the courthouse? Oh, the suspense of it all.

Inquiring minds wanted to know where the heck the intruder was hiding in Lulu and Dante's apartment. It's a studio for criminy sakes, just one room and a shower. Dude better expect a beat down when Dante catches up with him because no one gets away with kidnapping Port Charles' Lulu. Unfortunately she doesn't know it, but Lulu just stopped Laura's wedding to Scotty. That's our Lulu. Maybe it wasn't the exit that Julie Berman would have liked, but it was poetic. Could it be Luke and Laura are about to go on an adventure together to find her? She was just part of one of the major plot points in "General Hospital's" history. Let's hope they find Robin first.

Stuffed animals, not just child's play.
This week was creepy in the stuffed animal department. If anyone needs a stuffed bunny or bear for Easter, pick one up directly from the toy store and do not accept any furry deliveries that may include cameras and clocks. Really, no one wants the Easter Bunny to see anything. It was easy to forget just how creepy these events were when Dr. Britt Westbourne called Dr. Obrecht "Mother" in the park. At least Bobbie and Nikolas arrived in Port Charles to take the edge off.

Find out how to celebrate General Hospital's fiftieth anniversary with 20/20 and review Soaps.com's Primetime Dish to find out more about your favorite renewed television dramas. 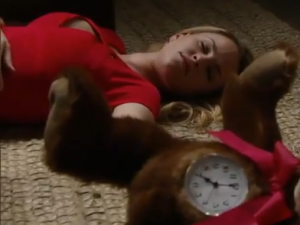 We’re not even close to the date of the Nurses’ Ball and having all the fan favorites return and I’m already busting out the tissues. It is hard to remember the last time we had to say so many goodbyes. If people weren’t leaving Port Charles, they were abandoning the love of their life. One thing is for sure, its a little sad to be losing the “OLTL” characters. I wish Todd didn’t have to make is sound so final.

Wham bam thank you ma’am.
They’re outta here. Starr, Todd and John blew out of Port Charles as fast as they blew in. Todd indicated in his goodbye to Michael that he’d never see Carly again, but she has a pretty smile. Todd-speaking will be something to miss. There’s some comfort in knowing we still have Heather Webber…and then again there is nothing really comforting about that.

Port Charles could take or leave John whose departure seemed cold. It appears Sam took to him easily because he seems as stone-cold as Jason and was just on the other side of the law.

We kept bouncing from one goodbye to the next, even if they weren’t in the same room together someone was talking about it being over. Tell us which couple is fooling themselves into thinking it’s over in the GH Poll: Thou Does Protest Too Much.

BFFs.
Sam and Carly drinking it up at the Floating Rib, together! Too bad Jason wasn’t alive to see it. It was great to see the camaraderie surface in these two. If anything, they need a friendship more than a man right now. Sadly these two may be the only thing keeping Jason’s memory alive in the hearts of Port Charles.

Lucky and unlucky in love.
The romantic dark horse of the week, Elizabeth, gave AJ another chance at a date after the sweetest apology that had poor Felix’s heart twitterpated. Felix needs himself a man but the Floating Rib won’t cater to his needs.

Frisco is scoring daddy and maybe granddaddy points. Hope he doesn’t screw it up before the clock runs out on his game because if he isn’t there to help Maxie when the truth about the baby breaks Lulu’s heart it will be an epic fail. Mark my words, the truth about that baby will come out. If you can call what Ellie and Spinelli have as love, the news of each others’ expectations over procreating was a forced implication that the game is over for the two of them. The fact they are still fighting about it at the apartment will surely give Maxie pause about keeping this secret much longer.

Throwback Thursday GH Poll: To Wed Or Not To Wed