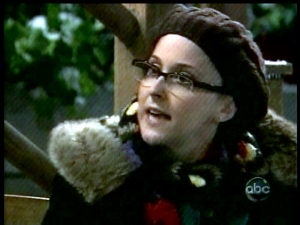 Happy New Year every one! I’m ready to put all the tinsel behind me and get back into a nice, steady routine again aren’t you? I’m worn out. In the midst of the various combinations of friends and family, meals, movies and parties, I found myself very pleased when I looked at the calendar and realized it was a General Hospital day, as opposed to a pre-empt day. An hour of normalcy was what I craved. Well, if you can consider anything that goes on in Port Charles to be normal!

Not too much went on last week since there were only three days of new episodes. The first of which was consumed with Robin and Patrick’s wedding. I found myself a tad annoyed for some reason, even though I was touched by all of the sentiment. And then I realized what was annoying me, we’d already heard from everyone who loves Robin about how they were feeling about her big day. So why repeat again just a few weeks later? Robert was the only newcomer to the wedding, so it was nice to see him gush over his little girl. Robin certainly got her figure back quickly eh? Love soaps. If only life could be so forgiving. I loved all of the vintage footage that played while Robert and Anna recalled Robin’s childhood. I think I watched it all the first time around, in fact. For me, the highlight of the entire wedding was hearing Bradford Anderson sing during one of his fantasy scenes with Kirsten Storms. The dancing was lovely, too, but that voice! I was already looking forward to meeting him on the Soap Cruise in just a few weeks, but now, I just might try to get him to a karaoke bar if there is one on the ship. (I’ll video tape if I get so lucky, don’t worry!)

Michael’s birthday brought some pleasant surprises, I thought. Dylan Cash, for starters! Michael looked older as if he truly is growing up in that darn coma. Having Carly walk in to find Sonny there was a nice touch, too. I especially liked the forgiveness that she seems to have found in the past few months and how tenderly she spoke to Sonny. That scene was among the best of the year if you ask me.

I wasn't especially looking forward to this Winifred character until I actually got to see her in action with Spinelli. It was good fun watching her awe of The Jackal, don't you think? I couldn't help but think that she had an uncanny resemblance to Elaine on "Seinfeld". Check it out, you'll see what I mean. If only we could see her dance! (You'd have to have seen Elaine's dance moves to get that one. Hilarious.)

I'm kind of liking Nadine as a business person, so far. I especially like how Nikolas is acting around her for some reason. It's not patronizing like I thought it would be. Anyone beg to differ? Aunt Raylene's plow fitter for national defense? I'm intrigued.

I wanted to slap Maxie for being so selfish on New Year's Eve while demanding that Spinelli put his cold aside and focus on her computer problem. I, too, would like to see the demise of the espadrille, but I'd like to think I'd have noticed it was a holiday for cryin' out loud. Of all the celebrations that we saw, which couple's method of ringing in the New Year would you prefer? I enjoyed Luke and Tracy's gambling (and hungry kiss!) Nik and Nadine's romp and Lulu and Johnny's snowflake stakeout, but I'd have to pick a private party for two like the one that Jax and Carly shared.

Nik delivered my favorite line this week, but he credited his mother for it. "The best thing that you can do at the end of the year is look back at your mistakes and learn from them in order to move forward." That Laura sure is wise, don't you think?

So there you have it guys, everything that meant anything to me during the final week of 2008. If you haven't already, please cast your votes in the
Best and Worst of 2008 poll.