Luke and Laura's chemistry.
There has been a lot of social discussion about whether these two are bringing the heat anymore, but maybe they just haven't been given enough airtime together, especially alone without Scotty looming over them. What do you think about the chemistry this iconic couple still shares? Vote in our GH Poll: Turn Back Time.

Back at the hospital...
There was plenty of drama at General Hospital too, especially after Sabrina finally got some courage and told Patrick how she felt. He left her hanging, and the best was Epiphany giving him the business for doing so. In fact, she wasn't sure Patrick should even be operating on brains considering he never picked up on the fact that Sabrina was harboring feelings for him. No one tells it like it is better than Epiphany except maybe Felix who decided to save the day and dismissed the failing of the men in Sabrina and Elizabeth's life. He declared them nurses who could get on with their lives. Lucy seconded that and got them back to the job at hand, planning the Nurses' Ball. She produced a check from Anonymous and the ball was back on.

Things weren't any less awkward in Maxie's exam room as Dante and Lulu gushed over a baby that isn't even theirs. Even Britt had the decency to look ashamed about it all and distanced herself from the whole mess. Now, it's all on Maxie. And really, shouldn't she be sharing more awkward pregnancy scenes with Lulu? They have barely spent a moment alone since Maxie got pregnant and if they had the chance to act like the girlfriends we know they are Maxie might feel too guilty to continue. Of course, now that she has heard the heartbeat her plans are sure to change anyway.

And down in the lab, Ellie didn't let Spin off the hook for a second for swallowing her hard work and in the moment surgical extraction was probably the only thing she wanted to do. Spin was thinking on his feet though. He found Kevin hanging around the hospital and the next thing we knew Ellie was being hypnotized. Fortunately he got her to focus on finding the secret ingredient, but the million dollar question on whether or not she remembered it wasn't disclosed.

Find out why Taylor Swift's fanmail was tossed and AMC and OLTL have an official start date. 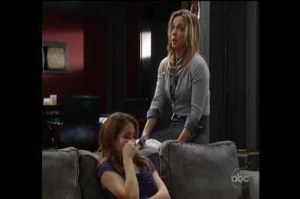 Credit: About to blow it. (ABC)

It was the week of one-liners in Port Charles, and despite the abbreviated airings there was still plenty to talk about – starting when Olivia packed up Steve’s ab roller for storage while he served his stint in Memphis. Awesome. Could there be any better way to say farewell to the sensitive singing doctor? It certainly set the tone for the funny week. Anything to distract from the untapped return of Laura and Scotty so far.

Desperate and unconvincing.
The scenes with Carly, Todd and AJ at the Metro Court were not only vintage Carly, but they played to the very best of Todd and reinforced the fact that AJ is one funny guy. It will be great if we get to see Todd and AJ play more off of each other in the future because funny men like this are totally worth watching. Todd totally called Carly and AJ on their “Desperate and unconvincing” act, and the barbs kept coming as he called AJ everything but his own name – BJ, OJ and LL Cool J were a few favorites. Of course AJ gave as good as he got, calling Todd Tad as much as possible. And did anyone else notice Carly harp on the fact she and Todd were only together as a couple for 30 minutes? Hmmm. Another choice exchange:

Carly: “Every time I look at AJ I burn.”
Todd: “Pretty sure there’s ointment for that.”

Todd called it perfectly when he refused to believe Carly would consort with her own worst enemy. As for AJ, his deal with Carly doesn’t really help him at all and only sets him up to look like a horrible guy in front of Michael – the one person he is dead set on proving himself too. And despite their pinkie swear to keep the fakeness of their relationship a secret, Carly turned right around and told Starr while AJ lied to Michael and Liz. Oops. And it’s not like he can’t find out who the heir is anyway with a little more digging. Wouldn’t Duke be the perfect man to put on that job?

The worst offense of this whole scene could have been Liz’s shapeless floral dress she wore for her date with AJ. It’s almost good he didn’t see her. He’d have been let down after her va-va-voom bridesmaid look from Steve and Olivia’s almost wedding. Oh, and Carly’s swooning when Todd declared her a mess, but less of a mess with him? Vintage Carly indeed.

It wasn’t the worst though, because the votes are in and Todd wins for sending Jocelyn Easter presents with an announcement from the delivery guy that they were from Australia. We learned otherwise when Todd met the Easter Bunny at the Floating Rib to get confirmation that the deed was done. The camera rigged plush bunny that Jocelyn received is probably her favorite toy now, but hopefully she is too young to share any secrets with it. Carly and AJ on the other hand have been found out.

Roadhouse chic.
The comedy continued at The Floating Rib as book promoter – and much welcome addition to the show – Agnes Chu tried to class up the joint by pairing cheese sauce with the cheese balls. And while the decor and treats may not have been up to par for Ms. Chu, Mac no “K” certainly was and she encouraged him to give her a call when Felicia left town with Frisco. Who wouldn’t be for this pairing? Mac has been so staid for so long, and Agnes is a real firecracker. This would work for me.

Connie and Alexis sniping over who had the better abs, Milo or Shawn, was perfect, and without Connie these kinds of scenes wouldn’t be possible.

Connie, trying to get Milo to take off his shirt: “Have you seen what’s under there?”

Alexis, referring to Shawn: “Do you see who I’m with?” Her silent apology to Milo was super cute too.

Has anyone read Love In Maine yet? Let us know in the comments below what you thought, especially about the hot and heavy additions Connie made to Molly’s innocent love story. Pretty soon though Molly might be ready to write her second love story, one including a love triangle. Her and Sam were off running to touch base with John and Rafe, who escaped his group home. He received quite the hug when she arrived.

Comforting cousins.
Olivia was a hot mess this week after saying goodbye to Steve and when she turned to her cousin for comfort, the viewers were treated to Connie’s now classic eye rolls and exasperated mannerisms. However, it was ridiculous that minutes before Olivia told her that Connie was gone and never coming back. Based on what history? It was a stupid thing to say.

Then it took Olivia and Sonny talking about the broken mirror and Kate’s “Falconeri edge” to figure out who might really be in charge. This thankfully took much less time than it could have.