If you're missing Noah Drake, you'll be happy to learn that Rick Springfield is coming back to GH. And get a preview of what happens when a girls' night out turns disastrous on 90210.

“General Hospital’s” Rick Springfield (Noah) performed with Dave Grohl of The Foo Fighters and Nirvana on the March 5 episode of “Jimmy Kimmel Live!” It was part of a concert promoting Grohl’s documentary, “Sound City.” The film details the famed studio where musicians like Springfield, Nirvana, Guns n’ Roses and Fleetwood Mac produced records. An album to accompany the documentary will be released on March 12 and will include, “The Man That Never Was” written by Springfield and The Foo Fighters.

Check out Springfield’s performance on “Jimmy Kimmel Live!” and the trailer for “Sound City.” 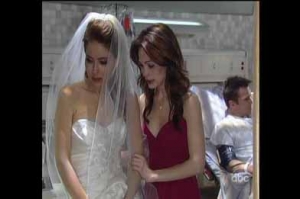