AJ and Liz.
These two have been there for each other lately and it's hard to be mad at that. Liz needs some love, and so does AJ, so this pairing could pick up the pace a bit. Loved his fist pump when she agreed to a date.

Duke and the great relish caper.
Is Duke really that smooth and suave that he was able to climb into a window at the Quartermaine estate, get caught by Tracy and play it off like he was just trying to get dirt on Luke and Anna? Tracy is more ruthless and suspicious than that. I did like his fib that he was "employment challenged." Just the way a gentleman would put it. Let's just see how Anna feels about his little B&E and employment lies though.

The end of the vamps?
When Lucy, John and Rafe busted into Wyndemere and Lucy started bellowing for Caleb, the look John gave her was absolutely priceless. Of course it made sense to try and sneak up on them instead of warning Caleb of their arrival, but not to the slayer. Too funny.

So the biggest question surrounding this whole thing, other than if it is really over, is why John's prints were a match for Caleb's prints. Is it possible they were related, making him some kind of uncle to Rafe? It will be interesting to see if and how they explain all that. And John's comment that Caleb had a flair for theatricality was right on point, right down to his noisy leather, which was a little distracting when he was trying to bond with Sam in the chamber.

Catch Lindsay Lohan on Anger Management soon. Then read about the latest casting coup for "AMC" as Ryan Bittle signs on to play JR Chandler when the show returns online. 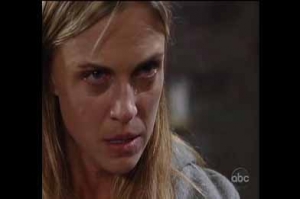 What a wacky week in Port Charles it was, what with all the vampire slaying, relish stealing, BLT craving, wrestling-convention attending and reverse engineering going on.

The unsinkable Heather Webber.
Cockroaches have nothing on Heather, who managed to wreak a bit more havoc on the town before turning herself in to Anna. I think we all knew once we saw Olivia’s vision and then Heather standing there with a butcher knife where it was all heading, so the biggest shock was that Steve actually made it through surgery considering actor Scott Reeves is leaving the show. Too predictable I guess. At least Steve was finally able to admit Olivia’s visions have some merit. And all it took was a gutting by his mother. Great. Loved that even when she was thrashing around with that knife with Olivia Heather still couldn’t get those BLTs from Kelly’s off her mind.

But Heather wasn’t done there and high-tailed it to Wyndemere to snatch up her little do-over Danny. Rafe stood strong though, and it was totally shocking that when he called her crazy she didn’t blow up like she had in the past. In fact, the scenes between these two were some of the most touching of the week. Watching Heather see what she had done to Steve through the eyes of Rafe, who grew up with a mother just like her, was surprising and subtle. Heather played it so subdued, a nice change from the over-charged emotions Kate was spewing this week.

What about Rafe?
Alison’s visit to Rafe was a sweet footnote to her violent end, but if she was going to take the trouble to visit him from beyond, couldn’t she have told him a little bit more specifically who would take care of him. A vague “You are not alone” didn’t really cut it for me. What do you think should happen to Rafe now that his parents are gone? Vote in our GH Poll: What’s Next?

Starr’s smartness.
Who knew Starr was such an engineering genius? Certainly not anyone who watches “General Hospital.” Thank goodness Michael was there to explain to all of us about all of the advanced classes she has been taking at the university, breaking down chemicals and whatnot. Watching her struggle to get through the ingredients in a carton of vanilla ice cream just a few minutes later rang a little truer. Thank goodness Ellie was in the lab to help her out.

Dangerous curves ahead.
So the only place more dangerous in Port Charles than Pier 52 is the winding road that people seem to think is totally fine to stroll down in the middle of the street. Around a blind curve. In the fog. Of course, all of these nighttime visits were to mourn people killed in the road so that makes total sense. Not. Get out of the road!

First it was Kate’s turn so she could see where Trey was injured, and she really gave an earful to Sonny about abandoning her. Poor Sonny. It’s hard to believe he hasn’t thrown up his hands at this point and just told both Kate and Connie to stick it. And really, now that Kate is back, I miss Connie, and Sonny probably does too.

Then it was Starr and Michael hanging out by the side of the road memorializing Cole and Hope – as well as reminiscing about their first kiss and first time they had sex. Seemed a little weird that was where they chose to get all lovey, but whatever. The bigger questions is who was stomping around the woods spying on them. Todd? Another vet? Cole?