I don't have much to say about Robin and Patrick's wedding that I didn’t write about during the week of their first wedding. It was lovely and although I ate up all the sentimentalism the first time, it felt a little redundant just a few weeks later. Except, of course, when Robert chimed in because he wasn't in town for the trial run. Shocking how quickly Robin got her figure back, wasn't it? The setting was beautiful and it made me wish that I could attend a holiday wedding, but I've not yet had that pleasure. But given the fact that I usually feel groggy and sluggish in the days that follow Christmas, I suppose that's a good thing, eh?

The only other part of the week that I'd like to comment on is the hope I felt for Jax and Carly when he eagerly obliged Morgan's request and kissed her under the mistletoe. Was that love I saw in his gorgeous blue eyes? I think so. His expression has been so full of frustration and disgust with her over the past six months that the scene really stood out to me.

Maxie wins for delivering my favorite line of the week. It was when she was rambling on about the dubious track record for weddings at Queen of Angels and she said, "After everything that's gone on in this church you'd have thought they could've sprung for a metal detector." She had a good point!

So there you have it guys, everything that meant anything to me during the week of Christmas. You? 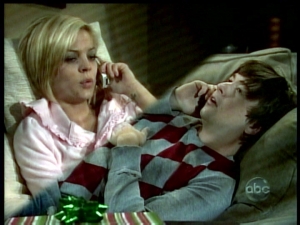 Happy holidays everyone. I’m pleased to report that I feel groggy, sluggish and content and I hope you feel however it is that you like to feel during this two-week hiatus from life! So far, I’ve watched two of the three classic Christmas Eve GH episodes that SOAPnet aired on Christmas night and it has been a real treat. Everyone looks so young and full-faced. Mac and Felicia are happily married with two little girls, Robin is with Jason and the Quartermaine house is full of living, breathing family members. Jax is with Brenda, Laura and baby Lulu spent the evening out at a very festive Wyndemere with Stephan and Nikolas, and Bobbie and Jerry are madly in love!

I suspect that that this year’s Christmas Eve show will be among the classics aired down the road. Giving Spinelli magical Santa powers was a fine effort, but felt a little displaced in the midst of a show that has spent the bulk of the year in a mob war. I thoroughly enjoyed watching him and Maxie go around town and pull gifts of magic from Santa’s pocket. Of all the scenarios they played out, I loved the one at Laura’s house the best. Lulu putting Laura’s angle on the tree with her brothers looking on and Laura’s phone call from Paris was great. Luke’s face was full of love as he spoke to her and that pretty much sealed the deal on his marriage to Tracy for me. I think it’s crystal clear that his heart belongs to his ‘Angel’ even if he has realized that his present life is better spent with Spanky Buns. Second on my list of favorite scenarios was when Monica put on the glasses and finally got to see Alan. I thought it odd that they almost immediately started to bicker, but at least they calmed down and enjoyed the moment in the end. I also totally loved the split screen ending of the episode when Maxie and Spinelli were talking on the phone. Visually, it took me back to simpler times with regards to production values and I appreciated it! 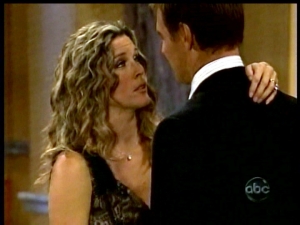 Vanessa Marcil to Appear in "The Nanny Express."