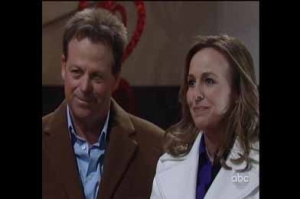 Valentine’s Day came a little late to Port Charles, and not everyone got the romantic evening they were waiting for. Luke got just a few brief moments with Laura before Scotty returned with an announcement to rain on his love parade. Michael and Starr scrambled – unsuccessfully – to find any chance to be alone, and as for Sonny, he just couldn’t seem to catch a break in the love department at all.

The party.
Usually big events in town that gather everyone together are at least entertaining, but the party at the Haunted Star was a little bit staid to say the least – possibly because half of the people who were there wanted to be anywhere else. Felix had to drag an emotionally unstable Sabrina there, and all he had to do was add alcohol for her to sink into a total shame spiral. She was practically ready to turn herself into Dante and even confessed all to Maxie. At least fallen Officer Carlson got a little bit of love after his death as Sabrina humanized the senseless loss.

Things were a little more hopping outside the party when Luke and Laura met up on the deck of the ship. Of course, they barely started talking about his breakup with Anna before Scotty emerged with news of his engagement to Luke’s ex. It will be interesting to learn what happened to these two off camera over the past few years for her to agree to this. But it is also great to see the writers tap into Scott’s vast history with Lucy. Kevin was not the only man who has saved her in the past, and Lucy even acted as a surrogate for Scott’s baby way back when. This is a reunion I hope happens sooner than later.

Meanwhile, Lulu’s mysterious gift perked up Luke and Laura’s ears, but was it possible Laura and Scotty have something to do with it all? And I wonder if Dante will just be let off the hook for never even getting Lulu a gift.

Elsewhere, Ellie and Spin were having the most romantic – and incredibly dull – evening together. Blah.

Frisco fixing everything.
Where to begin with this one? Part of me was glad that Frisco put Britt in her place. Whether she will do his bidding or not is another issue. But for Frisco, who claims to be trying to win back his daughter and Felicia, to go along with Maxie’s plan without even asking her if she would rather keep the baby was a bit horrifying. This is his grandchild and it spoke volumes about the kind of family man he claimed he was trying to be now.

Sonny’s double date.
Here’s hoping Sonny was keeping up with his medication, because without it he would be totally lost. He finally admitted his feelings for Connie – who I still think was the original identity he fell in love with. Not only that, she finally opened up to him. They kissed, they did it, and they basked in their happiness for all of about 10 minutes before they fell asleep and Kate returned. It was all downhill from there as she ran off, crazed and hysterical, to the one person she knew would be there for her – Olivia. But did Sonny think to call her there? Nope.

Meanwhile, Olivia filled in some major blanks for Kate, who really did miss a lot in the five months she was gone. Poor Kate’s last memory was finding out Trey was her son, and now she has come back to a big old mess. She doesn’t even have her magazine anymore. Consider her an emotional wreck, party of two. At least her visit got Olivia’s mind off of her gruesome vision of Steve’s stabbing. Yuck.

Emma’s magic wand.
Okay, so maybe we all wanted her little magic wand disappearing trick to actually work on Britt, but was little Emma out of line? She is a super sweet little girl, but Britt has been making her behave very badly. In fact, when Britt called Patrick out about letting Emma behave rudely to adults, part of me was backing her up. What do you think? Vote in our GH Poll: Mr. Mom.

Team Quartermaine?
AJ really seemed to be a changed man last week, offering to lay down their problems and work together with Tracy, but she wasn't having any of it. It's obvious a pairing with Liz is in the offing for AJ, but his panic attacks really could pose a problem for him with Tracy and ELQ.

The jailbreak.
Molly has become one of my favorite characters lately. She is so sure of herself and could really teach Anna a thing or two about trusting her instincts. She's smart, sharp, cute and has all of the great instincts of a sleuth like her sis and arguing skills like her mom. Teens tend to be hard to work into regular storylines, but Molly is making it all work for her. With the help of Lucy she got John and Rafe out from behind bars and was brave enough to face the heat for it too. Now with Kate back, hopefully she can get her book back too.

Back at the pier.
There was more action a the pier last week, and it was the last time we saw Sam and Danny before they were absconded by Caleb. It was also where Caleb tossed Heather in the harbor, but could she really be gone? Olivia called it - no corpse, no death.

If you are looking forward to Jules' and Grayson's naked day on "Cougar Town," read more about it in Soaps.com's Primetime Dish. Then read our Celebrity News to learn more about Rhianna's recent fan attack.