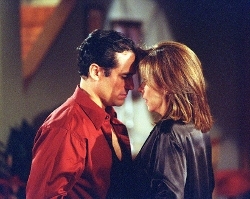 The special “GH” edition of People will be released on March 1 with the hardcover edition coming out on March 12.

In order to celebrate the 50th anniversary of ABC soap “General Hospital,” People magazine will be releasing a special issue devoted to the series. It will be published in hardcover and will follow many of Port Charles’ most beloved couples all the way back to 1963. Look for it at your favorite bookstore or online retailer.

Relive Maxieꞌs unfortunate run-ins with blackmail in our Throwback Thursday GH Poll: Secret Between Friends. And find out what Anna does with her confused feelings on “90210” in our Primetime Dish.

Join us on Twitter @soapoperafan and Facebook. Come tweet and Facebook with us about “General Hospital,” all the other soap operas, “Dallas,” “Glee,” “Grey’s Anatomy,” “Pretty Little Liars,” “Revenge,” “Vampire Diaries,” and “Venice The Series!”