Who wanted to reach through their TV screen and smash that yuppie's cell phone as he degraded our beloved Johnny on the tree lot? Stand in line folks because I get to go first! How dare he treat people like that! I say if a person can't put down their cell phone long enough to pick out a holiday tree, they don't deserve one. So there.

I appreciated Luke's most recent plan to try to win Spanky Buns back, but threw up the BS flag when Monica rushed into his room and declared that he needed emergency bypass surgery. Granted, it's a soap and I usually give wide berth when it comes to suspending my disbelief, but c'mon. I had hoped that she was just playing along to give him a scare, but then I realized that Eppy had faked the tests so well that Monica was ready to pull out her rib saw. Shouldn't the good nurse have been reprimanded as well as the mischievous patient? Still, I prefer all of this to seeing Luke sloppy drink for another week.

As for 'heiress' Nadine, I am surprisingly intrigued by the thought of her coming into money. I am also enjoying Nik's slowly building love for her and seeing his normally stern face soften when interacting with her. That Raylene was a regular Sam Walton, don't you think? Enterprising, yet the anti-Trump.

I had two favorite lines this week. One came from Alexis when she told Luke that she gets her wisdom from watching Oprah. (It didn't take me long to appreciate the subtle plug for ABC. It was much preferable to the Campbell's soup talk at Kelly's last winter, don't you think?) The second line came from Claudia. She had started to sing "The Twelve Days of Christmas" to him and said that she'd sing more but, "…torture isn't my thing." I dunno, I was rather enjoying it! 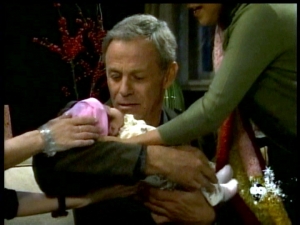 I simply have to begin this week with the Scorpio family reunion from Friday. As much as I was watching and enjoying what was unfolding on the screen, my mind kept rolling footage of snippets through the years with Anna, Robert and teeny Robin. Talk about soap history! The playful banter between Anna and Robert, the raw emotion on Robin’s face when her varying feelings about Robert came crashing to the forefront, and Robert’s pure sentimentalism when meeting his granddaughter for the first time were magic for me. And, I suspect, for many of you, too. On top of all that, something else became apparent to me while watching the scene. Did you notice how much Kimberly (Robin) and Finola (Anna) were trying to help Tristan (Robert) when it came to holding and feeding Emma? It was as if they were afraid he’d drop her! As sweet as his words (and delivery) were, his grasp on the tot was more like he was handling a box of rocks. Emma was crying because the way Tristan was holding the bottle the milk wasn’t getting to her, so suddenly Finola’s hands came into the frame to hold the bottle for him. That’s when the lines started to sound ad-libbed. Robert said, “It usually works for me!”, and Anna laughed and said, “…only a slightly different formula.”

There were other poignant moments for me last week as well. Claudia trying to bring some Christmas cheer into Sonny’s house was fun to watch, although I knew it wouldn’t sit well with him. Anyone who has lost a child knows that the first holidays are torturous on the heart. I suspect he’ll mellow a bit this week after seeing Morgan, but laying eyes on Michael’s ornament even delivered a blow to my heart. I’ve not felt much for Carly in recent history, but when Jax left and memories of happier times filled her head, I ached for her, too. 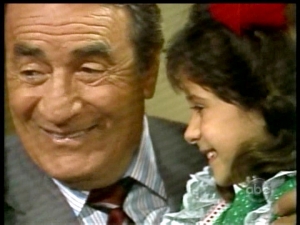 A Holiday Note to my Soaps.com Family 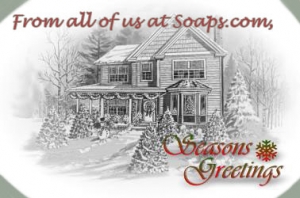