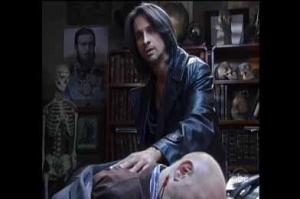 There was a lot going on this week, and dirty deeds were doled out all around. We are still a little unclear about whether vamps have really descended upon Port Charles – it could have been the scissors! – although fans of “PC” have no doubt about what Caleb can do. But murder was not the only crime on the menu this week.

Maxie.
What is wrong with this girl? It’s hard to figure out who she even is anymore. Once Patrick hinted that Britt was unkind to Emma, that should have been enough to call off this unholy alliance she has formed with Britt. Actually, the fact she is carrying Spin’s baby, supposedly the love of her life, should have been enough. As for Britt, she needs to be in jail. Making Maxie convince Sabrina that she used the wrong medication, then tampering with the autopsy results to confirm it, was so out of line. Now Sabrina’s career could be over, and to what end? Patrick would never take Britt back now over any circumstances. Evil.

ELQ.
Duke has been moaning and groaning about how he needs to prove himself to win back Anna, and sure, he was able to direct AJ to the Pickle-Lila history. But seriously, he needs to take a computer class. He didn’t even know how to do a Google search. Only in Port Charles could he get a job that high up at a major company, where he and AJ can bond over what little they have to offer while proving everyone wrong. But now that Luke is out of the way, all he has to do is figure out how to rekindle some of what they had before and he should be all set with Anna. Unless Robert ever wakes up. Wish we could get some word on his condition.

Loving Llanview.
Perhaps because of the upcoming departure of a few characters to the online reboot of One Life To Live, at least for a little while, there were plenty of shout outs to “OLTL” this week. Luke told Tracy it wasn’t on air anymore when they flipped on the news, and then Todd was trying to make his way to Alex Olanov’s St. Blaze’s Island until he queered the deal with Quint. Wherever Todd ends up going, here’s hoping he isn’t away from “GH” for too long. He has never been more redeeming than when he watched who he thought was John take Heather by the neck and toss her in the water, yet still come out to save baby Danny. He was fearless, and it should earn him some major points with Carly. His banter with Heather was great too, especially his joke about her jump off the roof of the hospital. Here’s hoping we haven’t seen the last of this pairing.

And while we understand why Todd and Heather were hanging around the pier this week, why can’t everyone else just stay away? This place is really bad for your health.

Laura’s return.
Obviously Laura returned to town for much more than to see Lulu through her pregnancy. Her little spy mission down by the pier (again, why are people hanging out there?) showed her only the beginning of what was to be the end of Luke and Anna. Thinking he is with Anna for real, she called some mysterious stranger to confirm they could “go ahead with their plans.” Assuming these other plans mean romance with another man, Luke might soon forget all about his precious Slim.

Connie and Tracy.
The tentative friendship forming between these two ladies is one of my most favorite developments lately. Connie seems to be here to stay, or at least will be a big part of the integration of Kate. The longer she is around, the better I like her – especially as the more abrasive aspects of her personality have calmed a tad and the softer, kinder Connie who is willing to open her heart up just a little shines through. Her loyalty to Tracy over the whole source reveal dust-up was a bit unexpected, especially to Tracy, and together these two could be absolutely formidable. More please!

These two haven’t been the only ladies getting chummy lately either. Carly and Starr shared a drink over their hopeless love for hopeless Todd and the new partnership between Starr and Lulu could be – interesting. Which female duo are you digging on “GH” right now? Vote in our General Hospital Poll: Gal Pals. As for Sonny, he won’t be able to resist this softer Connie for very much longer.

Molly, Rafe and the baby snatching.
The biggest question revolving around this whole story is exactly why Sam let Danny out of her sight for an instant when she knew Heather was on the loose. That being said, why did Alexis then leave the baby with a teenager she was suspicious of, who then left the baby with a guy involved in a murder plot on the run from the cops? Kristina is partly to blame in all of this too, simply because she can't seem to function without leaning on her very young sister all of the time. Meanwhile, she then told Alexis to not worry about her community service in Pentonville and worry about Molly instead because of her relationship with TJ. What? Molly did everything she could to protect Kristina's secret relationship with Trey way back when. Typical Kristina. I guess now we know why the writers have her in Pentonville for her service though - she is a lifeline to Johnny, and now, possibly, a love interest too?

As for Heather, when she kept saying she wanted to see her son I was sure she was talking about Steven Lars, so it was a surprise when she showed up for baby Danny. That kid needs his own bodyguard 24/7.

Lucy and John.
Partnering these two to look for Caleb should be pretty entertaining, if Lucy can get over the fact she believes he is a vampire.

Kevin's account of the Ferncliff escape was pretty entertaining as well, considering he thought Todd was the one who knocked him out due to the force of the hit. Like Lucy said, don't ever count that fruitcake Heather out.

But nothing was more entertaining this week than watching Caleb impersonating McBain. They both have the brooding down, but Caleb's dark humor twist on McBain's straight-and-narrow officer of the law was a riot, no matter how you feel about the vampire storyline. Although fans of "Port Charles" were probably doing the happy dance once Caleb caught up with Sam by the end of the week.

Love was in the air at the big wedding on "Glee" last night. Find out if your favorites found their way back to each other in Soaps.com's Glee Recap: I Do. Then find out how the plans to buy Seattle Grace progressed in our Grey's Anatomy Recap: Hard Bargain.