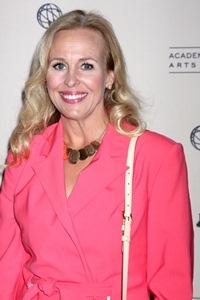 Laura Spencer has returned. We know not yet why, but we can hazard a guess that it has something to do with Dante and Lulu’s news that they are expecting a baby. It got Luke out of a Turkish prison, it is only right that it brings Laura home too. Little does Laura know that Maxie Jones is keeping a very big secret, one that Laura would frown upon given her history as a child taken from her biological mother.

Of course if her real reason for coming back to Port Charles is to claim Luke, as she once threatened Tracy she could do, she just found out she has competition with Anna. In 2008 though, Tracy was her only concern after she found out from Scott Baldwin that Luke and Tracy were married.

Laura had recovered from her catatonic state when she realized Lulu was in danger of prosecution. Scotty was seeking revenge for the death of his son and had kidnapped Laura. Luke went after the two of them and found them in California. After Luke rescued Laura following a high-speed chase, car crash and water rescue, they sought refuge in a cabin and reflected on their relationship and Luke’s status as Tracy’s husband. Laura and Tracy later had a row about it, but in the end Laura wanted Luke to be happy and wanted to get on with her life.

Laura parted with a kiss and an “I love you” with her plane taking off for continued treatment in France for her condition. To protect her children from dealing with a future relapse, she thought it best to leave Port Charles. Unbeknownst to her, her flight left with Scott on board.

Check out Soaps.com’s Soap History: Port Charles for an overview of the “GH” spin-off that is coming full circle by bringing back storylines fans didn’t plan on seeing again. Also, visit the Dallas Recap: False Confessions and return each week for recaps after Monday’s show.