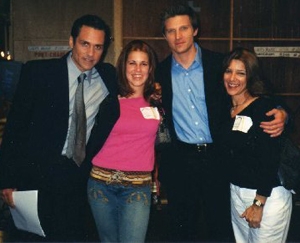 Tickets for the Main Event went on sale on January 9! Go to the GH Fan Club site for everything you need to know to get in on the fun! In addition to the Main Event, actors’ events are in the works too. They include: Bradford Anderson (Spinelli), Greg Vaughan (Lucky), Tyler Christopher (Nikolas), Carolyn & Derk (Diane & Max), Leslie Charleson (Monica), Rick Hearst (Ric), Julie Marie Berman (Lulu), Sebastian Roche (ex-Jerry), Brandon Barash (Johnny), Maurice Benard (Sonny) and Steve Burton (Jason)! Keep your eye on Soaps.com’s GH Actor’s Appearance page for further details as they are announced!

(As reported in early December)

There’s a special kind of pilgrimage every summer that involves scores of General Hospital fans coming far and wide to Southern California in search of quality time with their favorite Port Charles residents. (Hopefully, most of them/us realize that they are actors playing Port Charles residents!) It’s referred to as the annual GHFCW and details are starting to emerge for those who are ready make their plans! (Take a look here to see what kind of things go on every year!) The kickoff event is planned for Thursday July 16, 2009 from 7:00 PM – 10:00 PM and the final event (Steve Burton’s!) will be on Monday July 20 in the evening.

Debbie Morris, President of the General Hospital Fan Club, would like Soaps.com to help her spread the word of the newly chosen hotel to host the events.

After careful consideration, she has chosen the Airtel Plaza Hotel and Conference Center in Van Nuys, California. Compared to where the event was formerly held, the accommodations feel more like they deserve five stars, according to Debbie. “It has a beautiful bar, a real bar: warm and friendly, somewhere you will want to sit with your friends. The restaurant is fabulous,” Debbie reports. She added that the guest rooms are beautiful, too, and was quick to point out that the rate is merely $108 for single, double or triple beds. There’s a small parking fee, but free internet access!

Here’s what you need to know to get started with your planning. The rooms went on sale on December 17, so the time to make reservations is now. Call (818) 997-7676 or go to the Airtel Plaza website. Tickets for the specific fan events won’t go on sale for a few weeks, so stay tuned to Soaps.com.

In the meantime, Debbie wanted Soaps.com to pass along her holiday greeting to you all, “Happy holidays to all of you and your loved ones. I wish you a prosperous new year filled with warmth, love and joy.”