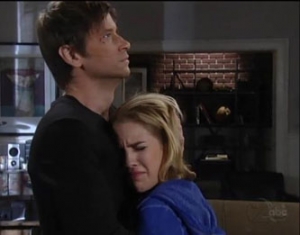 Another murder at the pier. (ABC)

There were a lot of comings and goings this week in Port Charles, with some confusion as to who was real and who wasn’t. Alison and Rafe came looking for Lucy and safety, but that was not to be as the pier claimed yet another victim and Rafe was locked up for murdering his mom. At least Ferncliff’s staff remained consistent as three criminals walked right out yet again.

Sabrina’s “crush.”
Olivia’s latest vision put Sabrina on the hot seat about as much as Liz’s insistence she tell Patrick how she felt, right on the spot at the nurses’ station. Mortifying! So now the question remains – what does Olivia’s vision of Steve and Sabrina getting cozy in the shower really mean? It was pretty obvious there was no chemistry between the two but that didn’t stop Olivia from really letting Sabrina have it for something she didn’t even do. Fortunately Britt wasn’t there to witness the whole uncomfortable scene. Unfortunately, it was only because she was too busy blackmailing Maxie into helping her destroy the sweet nurse. What is wrong with the staff at GH?

The Ferncliff Threesome.
Todd, Heather and Lucy were a trifecta of crazy perfection during their escape from Port Charles’ lowest security mental institution. Heather truly was an evil genius, pulling together an escape plan that was actually pretty decent. Plus, we got to see Todd in some aviators straight from “Top Gun.” Not cool of Lucy to leave Kevin lying in the snow after Heather knocked him out, but the whole situation was lightened up by Heather and Todd’s banter and high-fiving. And while we only got a bit of Todd’s fake French alter Rod, it would have been nice to get a dose of Mrs. Perkins too. Oh well – that was totally made up for by their mugshots that flashed up on the projector at PCPD – pure comedy.

Todd’s goodbyes.
Now that Todd is going on the run, probably back to Llanview, he had to say goodbye to Starr. Uh, where were the cops who should have been staking out the building? It was a touching scene between the two and it is likely they may not actually see each other for a while. Todd was so right – he only makes bad decisions and hurts people.

Then it was off to the MetroCourt for Todd, and his safe full of cash and a phony passport. Also, laughably, this was not being watched by the cops either. At least Carly had a bit of an explanation in that the cops asked her to call if she saw Todd. Ha! If McBain was mad at Ferncliff’s security he should be livid with his own. And did Todd really expect Carly to just leave Joss, her life and everything to go on the run with him from the police? Sure, they are good friends and they had good sex, but Carly knows better than anyone there is always another bad boy right around the corner.

Sonny, AJ and Michael.
Thanks to Connie’s total turnaround in the courtroom, Michael learned that Sonny had nothing to do with ELQ’s take down, yet still seemed wary of letting Sonny get close again. In fact, Michael has seemed less than enthused about a lot of things lately, except that food fight with Starr. He really needs to lighten up some, maybe go away with Starr for a romantic weekend. Do you think he will ultimately choose AJ over Sonny? Vote in our GH Poll: Choosing Sides.

As for Connie’s change of heart about Kristina, it was nice that it was her conversation with her cousin Olivia that brought it about. Connie needs to let people in who care for her, and it was understandable that she can’t do that fully with Sonny yet. But Olivia has no hidden agenda with her, only love, so it was a good person to start with.

What wasn’t cool was that Kristina got off as easy as she did. At least she got community service, very fitting for a mob princess. But like she told Johnny minutes before court, she really did want Connie dead and she would have done it if she hadn’t been stopped. She is a spoiled brat, and here’s hoping 500 hours under the thumb of a probation officer does her some good.

Frisco's return.
Well, of all the vet returns this one has been the most antic-climactic yet, and it has to be chalked up to the total lack of fizzle there has been between Mac and Felicia anyway. Can we get some heat people?

Ask and you shall receive.
Mac and Felicia may be a dud, but Starr and Michael were hot, hot, hot this week. We had been complaining about the lack of love in the afternoon lately, so more of this please.

Tracy's troubles.
Whether Luke and Tracy are together or not, their scenes are always filled with wit and true caring for each other. And now that we know the possible heir is Franco's daughter, the hunt will be on.

Rafe, Molly and TJ.
So whether or not Rafe is the son of an angel, a vampire or just a crazy person, his chemistry with Molly at Kelly's was really sweet. How could Molly not be drawn in by a totally hunky stranger with a love of literature to match her own? Like Shawn said, she is always taking in strays, and this one is the ultimate. His mother was killed, she is the only person in town he knows, and he pleaded with her to believe him. Follow that up with TJ's jealousy flares and I think we have another little storyline brewing for Molly. Maybe she has some PI instincts in her from Sam and can really figure out this mystery. Let us know how you feel about teen storylines on Daytime in our Weekly Soap Debate: Teen/Young Adult Storylines.

Caleb and John.
So the vampire storyline is getting more love than most people originally thought, but the question remains if Caleb was really back, or if there are just some crazy and delusional people in town. I am of the camp that Caleb is back because we saw him at the crime scene alone after everyone left and there is no way McBain - in his right mind - would kill a fellow officer. And there is always the ring. Who knows - nothing is ever as it seems in Port Charles. Manifestation or not, Michael Easton was incredible playing both characters, adding so much dark humor - and hair extensions - in Caleb than he does with the typically brooding McBain. Even Caleb pretending to be McBain was right on target.

Learn more about Caleb's past with Soaps.com's Soap History: Port Charles. Then find out what the performers can't wear at the Grammy's in our latest Celebrity News.