Connie’s relationships.
Things are getting really good for this character. Integrated or not, she is less shrill and defensive and more vulnerable and sympathetic than she has ever been. There is big debate over whether Connie is the real identity, or Kate is, and I am team Connie all the way. She is the girl Sonny fell in love with and spent close times with Olivia back in Bensonhurst, while Kate was the cool veneer she put on after her trauma with Joe. Olivia seems to feel it and so does Sonny. When he commented that the situation was messed up, that was an understatement. A Connie/Sonny hookup would be nice too - their chemistry is off the charts.

What Heather knows.
No one holds more secrets in Port Charles than Heather, so what does the Ferncliff resident know about Edward's will, and how will she get Lucy involved? It obviously has to do with another heir, but who could it be. At least Michael finally got firm with AJ about something and told him to back off Heather. It will be interesting to see if he can resist wrangling with the ladies from the looney bin.

Is it possible that Todd, Starr and John are moving back to Llanview? Find out the details in Soaps.com's exclusive Interview with Prospect Park's Jeff Kwatinetz. Could Eddie Murphy be heading for the small screen? Find out in Soaps.com's latest Celebrity News. 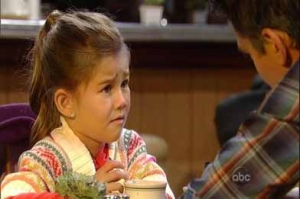 Credit: Going along with it? (ABC)

Lots of emotions came to the surface this week, thanks to Luke’s return, Spin’s reveal to Ellie about his evening with Maxie and Carly’s shunning of all men, ever.

Nonstop flight?
That flight Luke, Lulu and Dante hopped from Turkey to Port Charles – which non-stop takes 11 hours just in the air – made me mad. Magical time travel is a little irksome, especially when someone says something like, “Maybe we can make it back in time for Maxie’s doctor’s appointment?” – and then actually do. Ugh.

Fighting for Felicia?
With the announcement that Frisco is coming back to town, Mac needs to watch his back, and it is a good thing too. Mac needs a bit of a shakeup – even as a man throwing caution to the wind and slinging drinks instead of solving crimes, he still comes off boring. It’s painful watching him clean that same bar glass over and over, and no amount of strip pool will make it better.

Duke’s employment.
Speaking of needing something to do, does Duke want that old job Faison secured at the Haunted Star? He seems so lost in town, waiting for Anna to decide what to do with him. He even backed up his “adversary” Luke and acknowledged his help in foiling Faison’s plot. If Duke really wants Anna back he needs to make his own moves and show her he is that strong, confident man she was swept away by back in the day. Until he can live his own life with purpose she will never see him as a hero. What this town seriously needs is a good shrink, and not the kind they have over at Ferncliff. A good one.

Spin’s big mess.
If anyone needs Jason now, it’s Spin. He has no real friends anymore, which only leaves me craving more screen time between him and Milo. Anyone that gives him a break from recovering Ellie and secretly pregnant with his son Maxie.

The fact that Maxie is determined to pass her own baby with Spin off as Lulu and Dante’s is absolutely ludicrous. Who does that? The craziest part of this whole thing is that Britt is going along with it. That takes her from meddling and mean to criminal. Why do you think Britt is keeping her mouth shut for Maxie? Vote in our GH Poll: Covering Tracks.

At least Maxie figured out Olivia’s visions. Now who’s next?

Patrick’s confidence.
So where did it go? He was once a totally roguish race car driver and now he is waffling over a woman no one likes. At all. One person especially not having any of Britt’s business is Emma. How could Patrick look at that brow furrow and then ask Britt out ice skating? Bad daddy.Now that Emma is missing here is hoping he finally figures out what an evil stepmother she was being.

Ellie’s accusation.
Ellie threw out a very serious accusation about Maxie when she accused her of tampering with her car on New Year’s Eve. And while we all know this never happened, it isn’t a story that would be so hard to get people – including Spin – to believe. She was visibly shaking as she spit her words at Spin, and she should be upset with him. Of course, the best revenge would be for her to get up out of that bed, recover fully and get with someone else – maybe Milo? Let’s hope she doesn’t do any DNA tampering in the lab though. There has just been too much of that going on. Her disgust at Maxie for having sex after IVF was spot on though. Imagine what she will think when she realizes Maxie had sex the same day she miscarried? Ugh.