What do you remember about the ski trip disaster? Find out in last week's General Hospital poll.

Read about the return from the dead storyline on tap for "Neighbours" in Soap Scoop: UK/Australia Edition and go to Soap Opera Fan for info on Jon Lindstrom's return to GH.

What started it all.

Kevin Collins came to Port Charles in 1994. Since he was a psychiatrist, he thought he could help his mentally ill brother Ryan, who was a serial killer and stalked Felicia Jones.

Over his many years in Port Charles, which spanned both “General Hospital” and “Port Charles,” he became close friends with Mac and Felicia, counseled Stone Cates, discovered he had a daughter named Livvie and fell in love with Lucy Coe.

Together, the couple weathered many storms, such as Kevin’s breakdown when he started acting like his brother, relationships with other people, Lucy becoming a vampire hunter and Kevin getting trapped in another world.

When “Port Charles” ended its run, Kevin and Lucy were separated, but in 2004, they made an appearance together at Lila’s memorial service. Since Lucy hasn’t mentioned Kevin since her recent return, it’s anyone’s guess what the state of their relationship is now.

All will be revealed when Kevin comes home to Port Charles at the end of January, but do you remember how Kevin and Lucy first met? Vote in the poll and comment on Kevin and Lucy below. 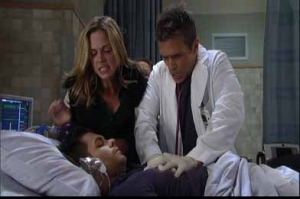