Vote in Soaps.com’s recent DOOL Poll as we reconnect with the past evil doings of Kristen Blake DiMera.

Tell us which soap is in need of fresh storylines this year by voting in the Weekly Soap Debate and the Soap Opera Fan Blog General Hospital Weekly Spoiler Video shows Johnny making a confession.

This year Port Charles families will soon be dealing with another car accident during the holidays. It wasn’t that long ago that we saw families frantically trying to find their loved ones crashed somewhere in route to a ski resort. In the winter of 2010/2011, friends and family of General Hospital were gathering at the hospital for a skiing trip. Matt and Maxie were going as a couple. Michael almost dodged the bus trip when he wanted to spend time with Abby. Molly and Kristina were disappointed that he was considering not going and Abby talked him into it. Carly was supposed to go on the trip but gave her seat up to accommodate her plans to attempt a reconciliation with Jax. Steve was going in Elizabeth’s place and was excited to be able to teach his nephew Cam to ski.

While on the road Morgan called Carly. They got disconnected after she heard screams and she immediately contacted Jason who went to look for the bus. It was a while before they were found and members of the party find Morgan who was missing.

Matt had a broken arm, Kristina suffered from hypothermia, Kristina’s friend Ali died later from what appeared to be a superficial head injury, and Morgan was found with a broken leg.

Do you remember who went in Carly’s place and returned in serious condition?

General Hospital Weekly Spoiler Video: The Secret Is Out 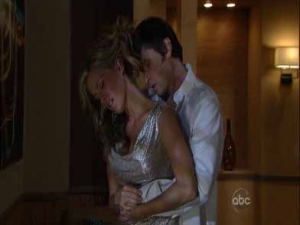