As for Kate and Carly's battle over Jax, at the moment I want Kate to win. I'm sick of Carly's antics. Showing up at the Crimson party wearing the same dress as Kate is childish, as is locking Kate in an elevator to get a leg up on the crowd. So far, Olivia has stolen the scene for me. Didn't she look amazing with her evening make-up and party hair? As a fellow woman who never spends more than $50 on a handbag too, that girl has my attention!

The Crowell family in Ohio is comical I suppose. As a native of the Buckeye State, I tend to cringe at the overalls and 'milk the cow' references. I mean, I wouldn't have to drive more than an hour or two to spot a cow I suppose, but there are about a dozen Starbucks and a Saks which are a whole lot closer. Aunt Raylene's homespun wisdom didn't sound nearly as podunk coming from her mouth as Nadine portrays it. She was compassionate and understanding with Nik, which was a pleasant surprise. I enjoyed seeing Nik in such a different world than he's accustomed to and wasn't too surprised when he offered to marry Nadine in order to grant a dying woman her wish. Not sure how it will work out and I don't really care, I'm just glad he stepped up.

I'm sure some of you will disagree vehemently on this next point, but I’m starting to want to see Lucky and Liz back together. I'm thrilled that she's finally realizing that her fantasy world with her gun-toting dreamboat isn't exactly what would work best for her boys. Lucky is her rock and it's about time that she spend some time on Lainey's couch and learn how to love in a more realistic way. So much for my above stance on tossing real-life away in order to enjoy soap world, huh? Some characters need to be more normal, I guess, and Liz is one of them for me.

I had no trouble at all selecting the line of the week. In fact, it jumped right out at me and practically said, "Pay attention Julie, here's your line of the week!" It was when Maxie showed up at Robin's and said, "You're outfit might be cute for skid row but not for mid-town Port Charles." 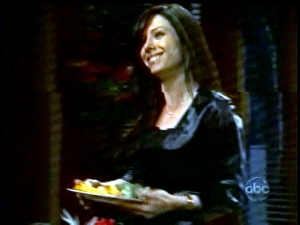 Boy am I lame. I mean, I realize that it was indeed Claudia who arranged the shot that ended up putting young Michael in a coma, but still, she didn’t actually set out to harm the kid. See what I mean? Lame! If it were real life, I’d lobby to lock her up and throw away the key for hiring a shooter in the first place! But in soap world, I find that I rationalize away my favorite characters’ misdeeds. So here I am, hoping that Sonny never finds out what his new bride ultimately did to his son. I find myself looking forward to their ‘battle of the chefs’ and hoping that they continue to build on their shaky (at best!) relationship.

Who else loved the scene between Patrick and Matt when they co-watched Emma? I don’t know about you, but this new side of Patrick is really endearing to me. I find myself wondering how Jason Thompson feels about babies and if he’s ever been around them.

I’m torn as to what Tracy should do with her oddball marriage to Luke. On one hand, I figure she should indulge her heart a while longer give it a go with him, and one the other, she’s absolutely right to protect herself from further pain when Laura breezes back to Port Chuck. I’m forced to remind myself, again, that this is a soap and of course she should stick it out with Luke! If she were my real-life gal pal I supposed I’d advise her to cut her losses and protect herself. But, real life isn’t nearly as fun as watching them bicker over cocktails during a monsoon. On a side note, Jane Elliot’s hair cut even looks good wet! 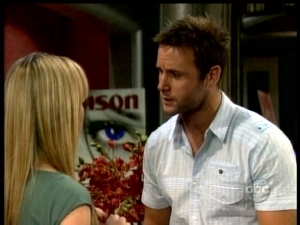 Give the Gift of General Hospital Music! 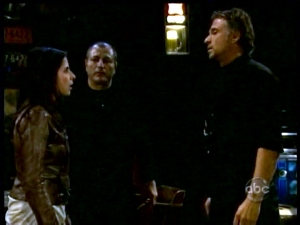