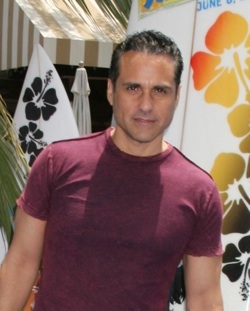 Sonny at the Christmas tree lot.

In 1996, Sonny begrudgingly went Christmas tree shopping with Mike and Jason. While there, they met the owners of the lot. The wife tried to drive up the prices, but Mike knew better. The point became moot when the wife went into labor. She didn’t want to close down though because she needed the day’s sales for her family. Sonny offered to stay behind and keep the lot open, while Jason and Mike took the couple to the hospital.

As the night progressed, the Quartermaines arrived. Sonny took delight in giving Edward a hard time as he wrote out his check. Edward was aghast when Sonny told him the price for his tree was $5,000.

Next, Brenda and Jax came tree shopping. Sonny told them the tree they wanted wasn’t for sale. Jax couldn’t ignore the chemistry that was obviously still between Sonny and Brenda, as the two bantered. Sonny ignored Jax’s attempts to pay for the tree and gave it to them for free. Jax quickly realized it wasn’t the tree he wanted, but Sonny told him he couldn’t always have the biggest and the best. Jax retorted that he still had Brenda. Sonny told him to take the tree and his jingle bells and leave.

Sonny later arrived at the hospital to learn the tree lot couple had a boy. He paid them a visit and playfully threw their profits on the bed, before holding the baby.

Find out which former “The Shield” star will guest star on “Leverage” in Soaps.com’s Primetime TV Spoilers and vote on what you’d like to see for Britt in Soap Opera Fan’s General Hospital Poll.