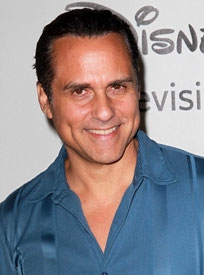 After Sonny realized that AJ got the better of him by goading him into pounding AJ’s face at just the right moment for Michael to see, he has decided to try a different plan. He suggested to Carly they butt out of Michael and AJ’s relationship and not say anything bad about him. That way, when AJ self-destructs all on his own Sonny and Carly will be nowhere near the wreckage.

But is it really in their nature to take a backseat, especially when it comes to their son? Sonny admittedly has a short fuse and judging by the number of people on the receiving end of her slap, Carly’s is even shorter.

Will Carly and Sonny be able to keep their mouths shut when it comes to AJ? Vote below and check out the latest General Hospital Weekly Blog for more details about everything that happened this week in Port Charles.

Find out the details of Kelly Clarkson's engagement in Soaps.com's Celebrity News. Fans of "Army Wives" can learn more about the actor returning as Hector in the show's seventh season in Soaps.com's Interview with Army Wives' Joseph Julian Soria.