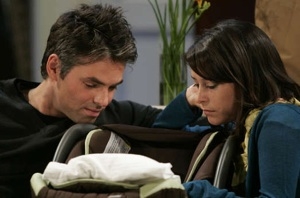 Patrick and Robin start a family.

These days Patrick is focused on raising his daughter Emma as a single father, while still dealing with his grief over Robin’s death. While Robin and Emma are the center of his world now, it wasn’t always that way.

In 2007, Robin and Patrick were in love, but when Robin decided she wanted a baby and Patrick decided he didn’t, they broke up. Patrick started dating nurse Leyla, while Robin tried to find a sperm donor.

While they were broken up, the Text Message Killer claimed Georgie as his latest victim, which devastated her cousin Robin. She sought comfort in Patrick’s arms and they had sex. In typical soap fashion, the condom broke and Robin became pregnant. Except, Robin lied that she used a sperm donor.

When Patrick figured out the truth, he wanted to be involved in the baby’s life. Considering all the back and forth these two had done over the years, more head butting ensued over custody and then about getting married.

Of course, the two eventually got on the same page and became engaged, but only after Mac locked Patrick and Robin in the interrogation room until they worked things out. While their first wedding was interrupted by the birth of their daughter Emma, their second attempt at matrimony was a success and they became husband and wife in 2008.

It wasn’t all smooth sailing after they got hitched though. Robin suffered post partum depression and Dr. Lisa Niles wrecked havoc on their lives. However, they got past all that and were a happy family until Robin’s presumed death in 2012.

Thankfully, Robin is alive, but she’s being held captive. Will she ever get back to her beloved family? Keep watching “General Hospital” to find out.

Remember when Salem’s Kate was diagnosed with cancer? Relive the drama in Soaps.com’s Flashback in DOOL History.