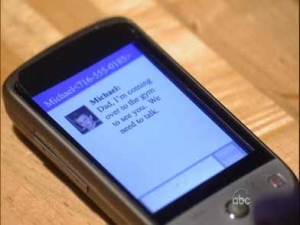 A few surprises and plenty of reveals kept the pace moving right along in Port Charles. One of the biggest surprise supporting players this week was certainly the cell phone, which got Obrecht and Faison totally busted in Switzerland, enabled AJ to setup Sonny – and then later revealed to Starr his trick. The best may be the picture of Fasion we kept getting to see, strutting through the halls of the clinic in Lucerne like he owned the place. Pretty slick.

Connie and Sonny’s chemistry.
Hello hotness! It is funny what a liberating new perspective can do to a dusty old relationship. Kate and Sonny were nice, but totally boring. Maybe it’s just because they haven’t had any kind of romance in months as they have slowly dragged out the DID storyline. But Sonny and Connie are so hot I couldn’t tear my eyes away from them at the gym. Sonny got to be a confident, manly man to Connie’s hyper-sexual being. And let’s not forget these were the two who originally fell in love back in Bensonhurst. With this kind of chemistry, Kate could stay gone for a while. In fact, I hope she does so we get to see Connie’s version of Crimson, complete with her plan to put herself on every cover like Oprah. Love!

Michael’s daddy issues.
First off, why the heck is Michael calling AJ “dad?” That is what he calls Sonny, and with all of their kidnapping and faked death history, wouldn’t Michael at least stumble over the transition of calling him that instead of AJ. Plus, how is Michael so in tune with AJ’s schedule? It was totally laughable when he told Starr that AJ is usually at the gym this time of day. I call BS. It seems like they are also setting Michael and Starr up to have a big fight over AJ, and the way Michael is acting right now it would appear he will take AJ’s side over anything Starr has to say. Will this cause a little alliance between Todd, Sonny and Starr?

Love In Maine.
While it is totally in Todd’s character to ignore Molly and TJ’s plea for help in the pursuit of more money, it is totally out of character for him to disregard Starr in this whole thing. She is the one who brought him the manuscript, she has actually read 50 or so pages so she could recognize a plagiarized copy and will be on a rampage once she realizes what is going on. Add to the fact that Johnny is ready to spill his guts about everything – which Todd knew all about – and Starr is about to have some serious daddy issues of her own. She does seem to handle Todd’s craziness well, and Michael should really take note.

Val Chmerkovskiy.
Kelly Monaco’s dance partner hit the screen this week, shirtless and glistening in the gym. Of course, Alexis could barely tear herself away, but she has her own man candy to take care of. Lucky girl.

Turning up the heat.
After months of living behind a latex mask, Faison was undone by John McBain and a cranked up thermostat. So simple and so effective. At least Anna, who has been in a fog ever since Fasion entered her life, has finally snapped out of it and refuses to take things at face value anymore. What was really funny was when she finally realized what was missing with Fake Duke, and it wasn’t the rubber lips she kept kissing. It was all in the eyes. Right. Could her and Robert’s search for the real Duke lead her to something even more precious?

Nurses' Ball.
It is so exciting waiting to see what is going to happen at the ball. Something has to happen that will shock the viewers, and the way the writers have been throwing curve balls, anything could happen. Murder, mayhem and more are all on the table, with a little bit of embarrassing performances thrown in for good measure. Remember Liz's Footloose performance in 2000? Well she does! Read Soaps.com's interview with Rebecca Herbst.

Where is the money?
When are we going to find out what happened to all of the $88 million given to Jerry Jacks? Tracy told Edward on his deathbed she got hers back, but no one else has. Todd and Sonny have both mentioned specifically this week in fact they have not. Are we about to get some kind of answers to this question? Maybe Faison blew through it all creating his perfect replica of Duke's face, not just a melted mess.

Not like this.
So Olivia walked in on Dante making his sperm deposit, and that was probably even more unsettling than all these puppy visions she has been having about the baby. Poor Dante. This pregnancy is sure to be a wild and embarrassing ride for him, what with the hormones and Olivia's psychic episodes. So what do her visions of the little husky pup mean? Voice your opinion in our GH Poll: Puppy Love. And now that we know her boyfriend Steve is leaving as Scott Reeves leaves GH, will this open up the door for a Robert and Olivia pairing? Here's hoping!

Missing "Revenge" already? Check out Soaps.com's Behind The Scenes Revenge Video for insight from the show's costume designer. Then, get geared up for the return of "Pretty Little Liars" and check out Soaps.com's PLL spoilers. Plus, we will be posting recaps for both shows when they return in January.

Join us on Twitter @soapoperafan, and Facebook. Come tweet and Facebook with us about "General Hospital," all the other soap operas, "Dallas," "Glee," "Grey’s Anatomy," "Vampire Diaries," "Pretty Little Liars," "Revenge," and "Venice The Series."