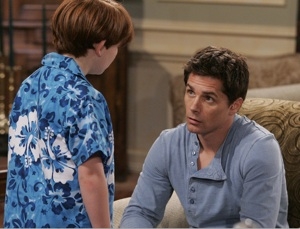 Since AJ has returned there has been a lot of talk about him kidnapping Michael and shooting Alan in the back. Flashback with Soaps.com to 2005 when Billy Warlock played AJ and Dylan Cash was a young Michael.

Feeling like a failure at ELQ and unloved by his family, AJ drained the Qs bank accounts and left town. He returned in 2005 and teamed up with Faith Roscoe to kidnap Michael, Kristina and Morgan. AJ staged his and Michael’s death so he could raise his son far away from Carly and Sonny.

AJ turned to his father for help in fleeing the country. Alan hid them in the attic for a while, but it eventually became clear that AJ was a little off his rocker. When Alan decided to stop helping his son, AJ shot him. AJ then fought with Jason, who discovered his brother and nephew, and fell down the staircase.

AJ broke his back in the fall and was hospitalized. This led to Dr. Asher Thomas suffocating him, making everyone think AJ was dead. Of course, AJ survived that incident and is back to fight Sonny for his son once again.

Who will win in the battle for Michael? Keep watching “General Hospital” to find out.