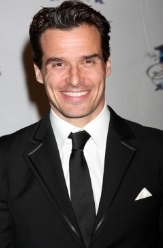 Former “GH” actor Antonio Sabato Jr. (ex-Jagger) continues his career as a reality TV star as one of the contestants on the new series, “Stars In Danger.” The show, from the FOX network, will follow celebs as they train with professional athletes and then attempt Olympic-style dives. Sabato Jr. has previously starred on such series as “My Antonio,” “Celebrity Circus” and “Celebrity Wife Swap.”

“Stars in Danger” premieres on January 9 on FOX.

Get a quick rundown of everything that happened last week on Daytime in our Soap Opera Fan Soap Summaries. And discover where Port Charles crosses over into real life in our General Hospital’s Love In Maine Published By Hyperion.