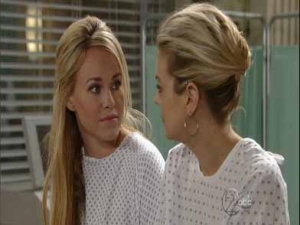 There were so many fun moments this week, it was nice to have some laughter in the mix. That has a lot to do with the characters, who are just so enjoyable to watch. Someone is have a great time writing for Todd and Connie was more sneaky than screechy, which made me want her to stick around for a while while as Kate stays on her mental vacation. And with the upcoming release of her novel as Hyperion publishes Love In Maine, it looks like this storyline has some legs in it yet.

Baby news.
First, let’s talk baby. There are lots of different elements going on with this storyline, one of them being the amount of times Lulu and Dante have been getting busy lately. If I recall, the OB who broke the news to Lulu and Dante in the first place about her condition, some new person and not Dr. Lee (where is she by the way?), she told Lulu to get a second opinion. Well, she never did that, just started falsifying adoption papers. The doctor also told her to use birth control because she can still get pregnant, just not carry past the first trimester. I am not convinced that Lulu really can’t carry a baby and see a possible double pregnancy on the horizon.

Which brings us to the hormones. I really am enjoying Lulu and Maxie’s friendship, the only real gal-pal thing we have going in Port Charles right now. The two of them sitting in that hospital room in their gowns, nervous and probably naked except for their socks, was touching. They are truly there for each other and there is no doubt in my mind Maxie is doing this for all of the right reasons. That being said, their extreme reactions to the hormones are hysterical, soapy fun.

Now on to Olivia’s visions of which I am a big fan. The writers at “GH” are not afraid of taking on what-are-you thinking storylines and Olivia’s LSD-induced psychic powers are one of them. Really, where else are you going to get this stuff? So her visions of Lulu holding a stuffed puppy and then later, a live husky pup definitely mean something. But I just can’t even begin to guess what this is all about.

And while Mac and Felicia have finally addressed Maxie’s possible problems because of her heart transplant, the fact that it was just brushed off means it really won’t be a problem or will be a very big one down the road.

Olivia and Robert?
I am feeling something between these two for real! There seemed to be a spark when they worked on the sketch of Faison together. Then, Robert has been talking her up all over town, with the utmost respect for her as a person and her talent. Hmmm. I love Robert and would love to see Olivia tell Steve to take a hike. He has not shown her near the same amount of respect in their time together as Robert has in just a few days. Here’s hoping someone else picked up on this chemistry as well.

Loose ends.
It seemed like the writers checked their list of dropped storylines this week and tied up a few loose ends for us. Delores, who has been MIA ever since Anna gave her special instructions to keep feeding Johnny false police info, is suddenly in New York. So that happened. Thanks for the update. Also, the division of Edward’s shares really stuck in the craw of viewers, considering he did not have 100 percent of the shares in ELQ to divide. Well, the writers took care of that by having Tracy tell Sam – who has a bunch of those other shares – that while the old shares are valuable, they do not have controlling interest in the board. What and huh? Whatever it takes to move this story along I guess.

Theodore King, CIA.
Veteran, “Hey, it’s that guy!” actor Kevin McCorkle showed up in Llanview to break the news to Blair, Skye, Tea and Carly that Lorenzo/Tomas is away on official business. The actor who played Tomas Delgado on “OLTL” and also played Lorenzo Alcazar on “GH” is, of course, Ted King. Wonder when we will actually get to see him?

Felix.
This new character can stay! Sabrina needs an ally at the hospital against “Dr. West Nile” other than Liz, who really should have more going on right now but hasn’t had a storyline since the pathogen scare. Maybe the writers are having a hard time knowing what to do with her without Jason around. I bet it would really, really bother Sam if she got together with Dante’s new partner…

Dante and John.
Now that Delores is suddenly out of the picture and John needed a legit job to try and get his son back, this just worked out perfectly didn't it?

AJ and Sam?
Where is this pairing headed? Sam seems not so put off by him, and if he is as reformed as he says he is, then he will want to protect his supposedly-dead brother's wife and son. Still, AJ has brought a mix of juvenile antics, plotting and scheming to the table. So where will a closeness between AJ and Sam leave John? I suspect not willing to give AJ any leeway on his misdeeds.

Todd's women.
It should be interesting to see how Todd's romantic entanglements with Blair and Carly play out. Who wouldn't want to see those two in a catfight? Which lady do you think Todd will choose? Vote in our General Hospital Poll: Blair or Carly?

AJ’s proof.
AJ has revealed all about Faison, and Anna is now finally face-to-face with him. My biggest beef with this whole thing is Anna's refusal to trust her gut. Where is that whip-smart commissioner who would have figured this out weeks ago?

What could possibly replace the "Jersey Shore" kids in our hearts? Read about "Buckwild," the new offering from MTV, in Soaps.com's Reality TV Rush. Nick Lachey was caught behaving badly at a football game. Find out how he responded in our Celebrity News.