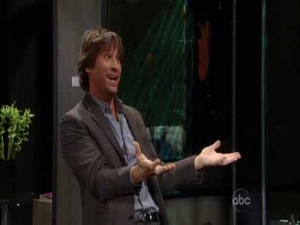 The shenanigans just kept going in Port Charles, with a whole new cast of old characters joining in on the fun.

The return of the vets.
AJ’s return from the dead must have been the all clear to release a torrent of familiar faces on Port Charles. Tracy has had her guard up with everyone lately and could use Ned as an ally. Skye is a piece of work too, and I couldn’t help but love her exchange with Todd when she had to remind him that she seemed familiar to him because he once tried to frame her for murder. Hilarious.

Kristina and Trey.
Whatever happened to Joe’s shop in New Orleans? Is there nothing for this kid? I get that times are hard, but Kristina did point out he has a degree from Yale. Sure, it’s in film making but it’s Yale! Kristina seemed very sincere about letting go of the bitterness she has towards her family and growing up. I guess having a gun held to your head can really help you straighten out your priorities.

The will.
So they have done the math quite enough times for us to realize that AJ, with Michael, would tie Tracy in family backers for control of ELQ. Heather might have done something with the will when she broke in, but since Diane drew it up she would have known if there were changes. Poster Wat Fan said, “Diane may have taken on questionable clients but that is her business – whoever has money. But Diane has never ever done anything illegal for any of them and very pointedly has said she wouldn’t ever do an illegal act to keep them safe. So as far as I’m concerned the will should be completely legit.” It is hard to believe that Edward would have cut Tracy out, but Skye did reveal that he knew about Tracy laundering money through ELQ. It should be pretty comedic to see how Tracy and AJ try to lure Sam to their side.

Pickle-Lila relish.
If Tracy was looking for a meaning behind the relish, she probably had to go no further than the story she told about how selling it is what brought ELQ back in the black once upon a time. There has to be something there.

Michael.
Michael was really starting to bother me with all of his judgements against Carly and Sonny. Not that he is wrong, but come on. He wanted in the family business! He was kidnapped by AJ! In my mind he came off immature and indecisive and a little selfish. Poster ranshoma said, “Michael is a disloyal baby. He has witnessed Connie’s craziness, Sonny’s hurt, and a failed justice system.” But there are just as many people who are rallying behind this new Michael. “I think Michael finally is growing up and has his eyes open for the first time in his life,” said poster Bettie Davis. “He finally sees what his parents have done and what they are like. People change throughout their life and that is what Michael’s doing.” Maybe he needs a rival for Starr’s affections to bring out that confident side of him again. Meanwhile, Starr had her own thing going on and should maybe work for Todd scouting authors for his publishing house, considering she won’t have anything to do with Johnny.

Kissing Duke.
Anna was struggling with her feelings for Duke because when she kissed him, something was off. Uh, that’s because you were kissing the latex lips of a smoking evil genius. That might be one reason.

The Scorpio bothers, together again. Watching Mac and a much-missed Robert talk shop about Lavery was great. Now Robert just has to get that gross cigarillo tested and gets some answers out of Helena and he'll see what's what.

Molly Lansing-Davis, published author.
I wasn't sure where they were going with this until Connie sat down at "Scarface's" desk with what suspiciously looked like a BLT from Kelly's. Still not sure, but this is not going to go well for someone - Sonny, Todd, and probably not Molly either.

Carly and Skye.
In the ultimate turnaround, these two were brawling on the floor one second and the next they were on a crusade to stop Blair from marrying Alcazar with Todd. Love it.

Todd.
From his over-the-top reaction to Blair's wedding announcement to his sheer joy at getting dirt on Tomas to his delight at getting Carly and Skye in his jet to ruin the big day, Todd was in fine form this week. And with Tomas/Alcazar in the picture, Todd will have a real nemesis to spar with.

Sister wives.
Best line of the week for me came from Ellie when she suspected Spin and Maxie of trying to lure her into being a sister wife. "Maybe that works for hipsters," she said. Too cute! She is really putting her faith in Spin, and while his intentions are nothing but admirable, when he talked her out of moving out - red flag!

Sonny and Connie.
So I would love to see Connie come back for real and become the person she was when she met Sonny. When he was getting through to her in the warehouse, I truly felt sorry for what they lost as children. Connie has really grown on me and I am still holding out hope that we see her first issue of Crimson. Could this be where we see Molly's novel in print?

The Nurse's Ball.
A bunch of storylines are sure to culminate at such an anticipated event. But how will Sabrina come up with the money to fund it? Vote in our General Hospital poll: Paying For It.

Which old "American Idol" judge has beef with the new crew? Find out in Soaps.com's Reality TV Rush. There was a beat down at Halle Berry's house on Thanksgiving. Read who got the worst of it in Celebrity News.