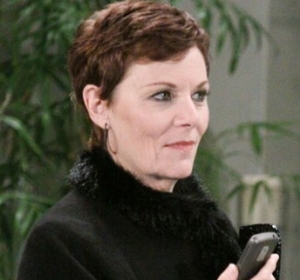 Out of the will.

Edward’s will was read on Monday’s episode, leaving Tracy devastated that her father left her nothing. But this was not the first time Edward left his only daughter out of his will.

In 1980, Edward drew up a will that disinherited Tracy. Before he could sign it, he fell to the floor in an apparent heart attack. He begged Tracy to give him his heart medication, but she refused until he promised not to sign the will that left her with nothing. Of course, it was all a test, which Tracy failed miserably. Edward was fine and kicked her out.

Sadly, this time Edward wasn’t faking. He truly died, but still left Tracy out of his will. However, he did give her a jar of her mother’s Pickle-Lila Relish.

In the mid 80s, Monica and her then lover Sean Donely took over the ELQ board, bankrupted the Qs and kicked them out of the mansion. Lila and Edward lived above Kelly’s until Lila restored their fortune by creating her own successful business with her tasty relish.

What message was Edward trying to send his daughter with Lila’s relish? What will Tracy do with it? Keep watching “General Hospital” to find out.

Read about the possible death on “Home and Away” in Soaps.com’s Soap Scoop: UK/Australia Edition and find out what’s to come in Port Charles in Soap Opera Fan’s General Hospital spoilers.

Up All Night Casts General Hospital...