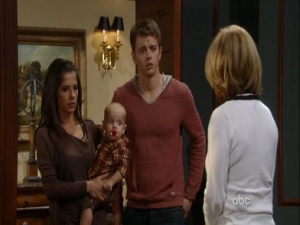 Despite a short week in Port Charles there was still plenty of drama to go around, most notably the passing of icon Edward Quartermaine, surrounded by family old and new.

Sending off a legend.
After John Ingle passed away it has been hanging over the show that pretty soon they would have to plan for Edward’s passing as well. It happened this week a little out of the blue, but I think it was handled very respectfully. He got to meet Danny, and when he reached out for his pudgy little finger it was just one of the sweetest moments, especially when Sam revealed that Jason was his father. It was also incredibly touching when AJ fell on Edward’s chest to pay his respects, too late to reveal his return before he died. As much of a jerk as AJ has been, it would have been nice for him to get that last moment.

The Q Thanksgiving.
Well wasn’t that a slice of cranberry sauce? Ned and Skye came back to send off Edward, but the biggest surprise guest of all was Heather. Alice certainly needs a bump in pay if she is going to keep doing so much bodyguard duty for Monica and crew. I hate to admit it, but I just love AJ’s reaction to anything Alice does. It is so juvenile which makes him much more likeable. Edward of course watched over it all, and when he walked off hand in hand with Lila, it was just perfect.

Robert and Olivia?
If Robert stays in town I would love to maybe see these two give it a shot. Anything to get her away from Steve. Although his storyline should probably get a little shot in the arm soon considering he was the one to help Monica cover up AJ’s resurrection in the morgue.

Sonny’s offer.
While I can understand Dante’s hesitation in taking Sonny’s money – their relationship will always be complicated simply because of what they do – I am glad he and Lulu decided to take him up on it. And not just for their sakes, but for Sonny’s too. He has been dealt some heavy blows lately after losing Bernie and Jason and Kate. A new baby to focus on is just what everyone needs. But only if we can just let this baby arrive, happy, healthy and not destined for doom like so many other children on Daytime. Not all of the posters felt they should take the money though. Despite thinking Sonny’s heart was in the right place, Soaps.com poster ransomha said, “If Dante weren’t a cop (when it’s convenient for him) then it wouldn’t be a problem. Doesn’t matter that Sonny’s coffee business is supposedly legitimate – it is a front to launder his dirty money – so any money coming out of there would not really be clean. Even the appearance of impropriety is enough to sully Dante’s ‘good name’ as a cop. People already doubt his honesty when it comes to Sonny – with good reason. If he wants to quit the force, then fine, take Daddy’s money. But as a cop? No. No way.”

Spin’s dilemma.
It only took months, but Maxie finally told Spin how she felt. She was certainly shocked by his answer, though but I am not sure how she could be. She has treated him so poorly in the past, married someone else, blamed him for Matt getting arrested and told him to move on. Plus, even she admitted how wonderful Ellie is. The question is now how long Spin will sit on this information and when he will hurt Ellie. He may have the best intentions when it comes to her and I know he truly likes her, but he will always be pulled to Maxie. So can she stop calling him “her Mac” now? Even Spin thought it was a little creepy. Ugh.

Rubber mask makeout.
So Anna has been making out with a latex mask and she can’t pinpoint what feels a little “off” about Duke? Forum poster ashuri-chan said, “As a long time viewer of ‘GH’ I really love what’s going on these days. However, Duke’s rubber face is simply over the top. Anna’s about to make love to him, has already touched and kissed his rubber face and doesn’t feel anything a little off? Just a little off? I realize I’m watching a soap where dead people come back all the time, switch identities, go from 2 to 12 years old in a few months, but mistaking a former adversary for a former husband in a rubber mask is totally ridiculous!” That about sums it up. I will have to say I love that after the reveal I have noticed actor Ian Buchanan take on many of Anders Hove’s mannerisms as Duke and find it totally fascinating. I need to go look at old clips to see if he had been doing it the whole time or just began playing it up after the reveal.

Michael's allegiance.
AJ's return has totally turned his life upside down and is affecting his relationships with everyone he loves, including Starr, who warned him not to forget about his parents who love him too. And let's not forget that Michael can't exactly afford to be aiding and abetting felon fugitives. Where do you think Michael's loyalties should lie? Vote in our GH Poll: Michael's Loyalty.

Sam and John.
Wow, Sam was totally harsh to John when she told him to focus on his own family and leave hers alone, and a lot of it probably has to do with guilt. She reconciled with Jason and they were moving on, but as we all know that doesn't just magically make old feelings disappear. Just ask Liz. So I can only imagine that Sam still feels a pull to him that she is sick over now that Jason is gone. This story is far from over now that we know John is out of work and banned from Llanview. In fact, he should be moving to town any day now, especially once Alexis encouraged him to do so for Sam's sake.

Tracy’s $18 million.
How did Tracy get her money back but none of the other one percenters have? Did I miss something? Unless she was just telling Edward that so he could be assured she is fit to run ELQ, which has been coming up a lot lately with AJ's return. I smell a battle brewing.

Connie in a corner.
The walls kept getting a little closer on Connie, and now that she overheard that juicy little nugget from Carly about wanting to kill AJ, I wonder what she is going to do with that information now? I can only imagine the kind of craziness Connie and AJ could cook up, and oh what a way for both of them to stick it to Sonny. Johnny may have just about worn out his usefulness to Connie. As he gets to cracking she could be on to the next big thing. Spoilerish, it was sad to hear about Trey's upcoming departure as Erik Valdez is out at General Hospital. I was just starting to like where his storyline could go and was not the only one. Poster Papaya said, "At first I didn't like him at all but I thought once he interacted with his father and wasn't acting like a jerk, that he was quite likable. In fact, I actually cried when Kate/Connie told him about his birth and abandonment. I felt really sorry for him. The whole Connie child story has some juicy possibilities and I'm sad that he's going."

Read about new gigs for old "AMC" and "OLTL" actors in Soaps.com's latest edition of After The Soap Finales: Where Are They Now. "Revenge" fans can get insight from the actors with Soap Opera Fan's Revenge Behind The Scenes video with Gabriel Mann and Nick Wechsler.

Michael B. Jordan Sizzles In Shirtless Photo As He Goes For A Dip In St. Bart’s — See Pic