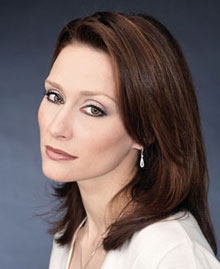 Skye Chandler Quartermaine returns to Port Charles this week after Edward passes away. While she was close with her beloved Grandfather, she also shared alliances with A.J., who recently returned from the dead, and Ned, who also returns for Edward’s funeral.

Skye Chandler came to Port Charles in 2001 after living in Pine Valley and Llanview. She was on a search for her biological father, after learning Adam Chandler, who she always believed was her dad, was not.

She discovered that Rae Cummings was her mother, but Rae wouldn’t disclose who her father was. Skye followed Rae to Port Charles, where she saw Rae talking with Alan Quartermaine. The truth eventually came out that Edward paid for Skye to be taken away so Alan and Rae would believe she died.

Despite some opposition from other members of the family, Alan and Edward embraced Skye, even giving her shares in ELQ. However, she still incurred Alan and Edward’s wrath on a few occasions, including when she gave Emily money to leave town, which landed her in a train wreck leaving her unable to walk. A.J. discovered Skye gave their sister the money and blackmailed her, but the truth of course came out.

A.J. and Skye bonded and she helped him try to get Michael back from Carly. She also gave him an assist when he kidnapped baby Kristina, who she became attached to. Tracy returned to town with information that Skye wasn’t Alan’s daughter after all. She tried to blackmail Skye, but Skye confessed the truth to her family. Alan stood by his new daughter’s side and legally adopted her, making her a Quartermaine anyway.

When Ned, who played along with Alexis’ rouse that he was Kristina’s father so Sonny couldn’t endanger her, got custody of the baby, Skye became a permanent fixture in their lives. She and Ned became a couple and she was a surrogate mother for Kristina when Alexis was denied custody after killing Luis Alcazar. Alexis and Ned went to court over Kristina, but Ned eventually dropped his suit. Skye, who wanted to be a mother, broke up with him shortly afterwards.

Who else will Skye encounter when she’s back? Tune in this week to witness her latest return to Port Charles. For more on Edward’s tribute, watch Soap Opera Fan’s General Hospital spoiler video.