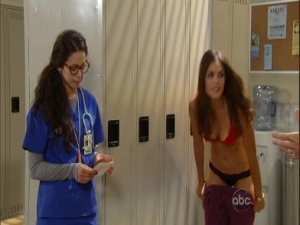 After the crazy moment last week when Duke ripped off his mask we didn’t even have to wait one day before the shocks kept coming. The real Duke was really alive, Robert came back to help and poor Luke has ended up in a Turkish prison. Crazy!

Double whammy.
Nothing says shocker like someone ripping their face off, so after last week’s cliffhanger Friday, it was unexpected to be treated with a double whammy on Monday when not only did we learn that Faison was behind the evil Duke mask, but also that nice Duke is actually also still alive – and being held captive by Faison. This storyline has gotten so convoluted however, it is hard to know if that is truly the real Duke lying in that bed. Hopefully with Robert back on the scene, he, Luke and Anna will figure all of this out soon. After all, Anna reminded Robert that people once thought they were dead too. Them and everyone else in Port Charles. But she also told him to pass on to Luke not to drop the soap in prison. Harsh! It is getting to be just all too much.

My Mac.
I’m sorry, but it was starting to get a little creepy every time Maxie moaned about “my Mac” while she mooned over Spin. Her plan to tell him how much she loved him before he slept with Ellie obviously backfired (some bacteria!). It was rough watching Spin tell Ellie he would never hurt her, when it is almost a certainty that he will. These two are cute together, but they are maybe too similar to make it for the long haul. It would not be a problem with me if a new young male love interest came on board to bad boy Ellie right off her feet. Maybe a couple so there is one for Sabrina too!

Misled Michael and unlikeable AJ.
It is hard to imagine how shocking it would be to see the father you saw killed in front of you back from the dead years later, but Michael was so quick to defend AJ it is sure to bite him in the back as he slowly pushes the people he really loves away to do it. I see big things for this storyline, and not many of them are happy.

Britt’s advances.
Confidence is very much one of her strongest qualities. It certainly wasn’t her bedside manner after her little run-in with the sick girl who, in one of the finer moves of the week, projectile vomited all over Britt. Of course that just gave her an excuse to take it all off in front of Patrick in the on-call room. Not sure I would have been as nice as Sabrina to someone who threw puke clothes at me then demanded I clean them. But for Britt, it was only one more step from scrub-strip tease to full-on advances at the Metro Court. She probably wasn’t used to getting turned down and it will probably only make her more evil before she gets what she wants. But Britt wasn’t the only Port Charles resident to take it all off recently. Which flash of skin was your favorite? Vote in our GH Poll: Baring It All.

The full Milo.
Ah, memories. Hearing Milo explain to Sonny what happened during Connie’s bachelorette party only made us long for his strip-teasing days!

Johnny and Lulu.
These two have so much history, which can be easy to forget as they have moved forward with their own lives. But the scenes between them at the Haunted Star hammered home that Johnny really has no friends, no one to confide in, and it was really kind of sad.

Connie Falconeri. Editor-In-Chief.
If anyone can make Todd snap, it will be Connie and her no wiggle-room contract/threat she presented to Todd. I may not have always liked Connie, but I would absolutely kill to see a few copies of Connie's Crimson. With the help of a cringing Maxie of course!

The payoff?
When Starr finally finds out the truth about Johnny and Connie, I want fireworks. I mean, I want crazed slapping, tears, a Todd intervention, the works. This story was put on hold somewhat so Sam could get her baby back, but now the road is clear to bring all of the dirt about who really shot out the tires that killed Cole and Hope out in the open.

More Tracy!
With Luke, without Luke, Tracy is simply hitting it out of the park right now. When she had Monica and Alice marched off in handcuffs after her scuffle standoff with Alice in the mansion was pure comedy. When Liz rattled off all of the Quartermaines involved in the Nurse's Ball in the past, she brusquely told them half of those people were dead. She just didn’t say which half. And despite her refusal to underwrite the ball so she would not have to work with Monica, I smell a forced pairing between these two to get the ball in gear. And I can't wait!

Olivia’s visions.
It was so great when she saw Fasion behind his mask. Right on! So when is she going to have a vision about Steve’s lying butt? He is obviously sweating AJ's return, and he should be. Hopefully she can come up with a vision that will help Lulu and Dante have a baby. At least her psychic ability paired with Liz's art skill should help Robert move things along very nicely.

Guy Fieri's new restaurant was seriously panned by the New York Times. How bad was it? Find out in Soaps.com's Reality TV Rush. Bon Jovi's daughter is having a really bad week. Find out why in Soaps.com's Celebrity News.