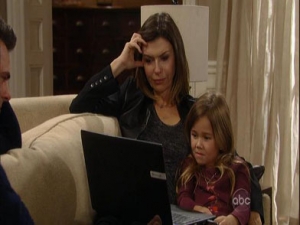 AJ’s return has certainly rattled a lot of cages, which is hilarious considering no one was even supposed to know about it. Monica was all in a dither over what to do but this is one secret that can’t be untold. Even so there were still plenty of secrets to go around – especially who the heck has been walking around wearing a Duke Lavery mask!

Connie’s rape.
The jury was kind of out about whether Joe Scully Jr. had actually raped Kate or if Connie was around back then and came onto him like he said. Any questions were laid to rest when Connie spelled out to Johnny what it was like to go through that experience. She said she took a beating for what Joe Jr. did to her, and she has no reason to lie. In fact, it seemed to me that she was almost jealous of Kate. She told Johnny that Kate got off easy – she got a whole new life while Connie was stuck with the kid and the memories. It was the first time I truly felt sorry for Connie, who is finally becoming more than just a one-note bitter Bensonhurst broad.

PB & tomato on white?
Finally, after Connie laid herself bare to her husband, she and Johnny shared a moment when she shared her favorite childhood sandwich. Yuck.

Tales from the crypt.
Did Sonny really take Carly to the Quartermaine crypt to prove to her AJ was dead because his name was on the stone? Little did they know that the ghost of Alan Quartermaine was right there, listening to everything they said. It was nice that he and AJ got to share that moment when AJ told him he was proud to share his name. Of course Alan couldn’t come to visit without seeing Monica, and they were able to share in the responsibility of AJ’s problems together. She was able to apologize for hiding his own son from him before he died and he even managed a pat on the shoulder for Tracy!

Birthday wishes.
Watching Anna and Emma view the video of Robin was just so sad. Emma was just so happy to see her mommy, and I think Anna was almost crying more over that than missing Robin for herself. Besides, Brooklyn Rae Silzer (Emma) is just the cutest actress ever. I have to wonder if she and the girl who plays Josslyn (Sarah Johnson) will always have a bitter rivalry. I can just see it now: “Remember when you were the princess and I was the corn?”

Who is Juan Santiago?
Sabrina let it slip to Elizabeth that her cousin was Juan Santiago, who just so happened to have performed with Liz in a Nurse’s Ball routine back in the day. So who is he? If you didn’t know he had come to Port Charles thinking Sonny was his father (he wasn’t) and dated Emily Quartermaine for a bit. He hasn’t been seen or heard from since he left for South America more than a decade ago. Learn more about him in our General Hospital Poll: Looking after Juan.

Adoption blues.
Lulu’s manipulation of the adoption papers was just about the stupidest thing she has done in a long time. Didn’t she know that all of her lies would be exposed right away? Hasn’t she ever heard of Google? It could be possible that she did this in a subconscious effort to hurt their chances of adopting a baby. But what is Dante thinking even going along with this?

Jason’s statement?
Before Jason went missing, numerous people kept bringing up the fact that he needed to give his statement about what happened on the roof of the hospital. And when that happens usually there is some kind of plot reason why. I have to wonder what is going to happen since he was never able to give that statement. Will it somehow clear Heather? Or will it just fade off as something that could have been but never was?

AJ’s not-so-secret return.
The number of people who know AJ is alive and living in town is growing by the minute, which means the authorities shouldn't be too far behind. But now that he is back, has he really changed as he claims? Doubt it. He talked a big game, but his laughter at Carly knocking herself out at the pier was about as diabolical as you get.

Carly and Todd.
I feel bad for Carly that she doesn't have Jason to call anymore when she needs some support, but at least she has Todd. I know he has done some skeevy stuff, but I love these two together. AJ's return should really throw these two together, especially if Michael turns against her.

The Quartermaine crew.
It had to feel so darn good for Tracy to catch Monica in her nefarious mess after all the grief Monica gave her about Scully. And there is certainly no love lost between her and AJ. I am wondering what will happen with the character of Edward now that John Ingle has passed away. It seems wrong to keep the character going for much longer.

Best sleep of her life.
The second-biggest OMG moment had to be Alice taking Tracy down in a chokehold. Her wrestling days certainly came in handy! She certainly got a new fan in AJ who couldn’t get enough of it all. She probably even did most of the heavy lifting when they moved her to the boathouse.

Duke in Switzerland.
Robin is one smart cookie. She was able to catch Duke in his lie within minutes despite him arriving to rescue her, when she should have had her guard down the most. Now for the biggest OMG moment - who the heck was behind the mask?

Starr-crossed lovers?
I love that these two are telling each other everything. Keeping secrets has been the downfall of many a soap couple. And if anyone knows what Michael is going through right now, it is Starr. But when are they finally going to do it?

Which celebrity newlywed couple was robbed on their honeymoon? Find out in Soaps.com's Celebrity News. Think you know who will be the next Bachelorette? Rumors are flying in Soaps.com's Reality TV Rush.