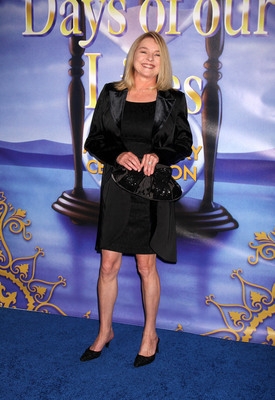 Heather Webber has a long-running history on “GH” as a crazy villain and rightly so, she has destroyed enough lives and continues to do so from the confines of mental institutions and more recently a “GH” hospital bed after falling some eight stories from the same hospital.

It will probably come as no surprise that a baby was involved in the most recent big mess. Back in the day Heather did all she could to take Monica’s husband, Jeff Webber, for herself. She thought she would be most successful when she found herself pregnant. Monica has a love of children too and was decidedly in favor of raising this baby with Jeff.

Heather went to extreme measures; first there was a faked suicide, and then an attempt to sell her own baby, Steven Lars, to the Taylors. Jeff Webber felt bad, gave her a small amount of money to make it big in New York City as a model, and thought he’d washed his hands of her.

Poor baby Steven Lars would know no peace. His mom found a soul mate, landlady Ms. Hadley, to help scheme in selling him again at a much better price for all.

In the end Heather was out a baby, had no money, and couldn’t make it to LA to take the west coast by storm. Jeff Webber at this point was looking for his kid and she claims he’s dead. What’s a man to do? He proposed to her.

The Taylors welcome Heather into their home and she yearned to have their adopted son P.J., her Steven Lars, back for her own. In her attempts to get what she wanted this time, Heather drank iced tea laced with LSD that she intended for Diana Taylor.

Share what you love about Heather Webber, her sharp wit, endearing way with babies or love of family below.

General Hospital Joins In For Day Of...

GH Poll: Which Dead Character Would...