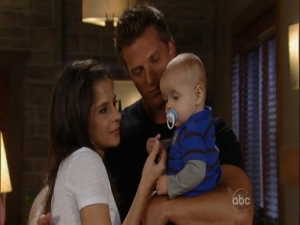 It doesn’t get more fun than Port Charles on Halloween, and everyone got into the spirit of things by dressing up for the party at the Haunted Star. But other than the fun costumes (Luke and Tracy took the cake) we had new hookups, old characters back from the dead and even a small reunion between Jason and Sam.

Bratty Brit:
Could Brit be any more unlikable? When she told Emma that she would never be a nurse because it was beneath her, it was almost heartbreaking. Emma is just the cutest actress, and Brit was putting down her mommy! And while Sabrina meanwhile is over-the-top lost right now, her interaction with Emma is so sweet and something that little girl needs.

The Nurse’s Ball:
Could it be? Are they really and truly going to bring back the Nurse’s Ball? I could have died when they flashed the picture of Lucy Coe when Sabrina and Emma were looking through the scrapbook of balls from the past. If there is a ball, Steve could play his guitar, Starr could sing and Sam could dance. As for the rest of the cast, it would be a hoot to see what other hidden talents there are in store. And thank goodness, Lynn Herring is coming back.

Carly and Todd:
Not only do these two have incredible sexual chemistry, their banter is just too cute. Sure, Todd has great banter with just about everyone he shares a scene with, but Carly is a real match for him. Todd has certainly done a lot of bad things since he has come to town, but he has done some good too for the people he loves. That makes him totally redeemable with a bit of an edge. Bad boys are Carly’s Kryptonite and Todd certainly fits the bill. Are you hoping for a Todd and Carly hookup? Let us know if they are your favorite new couple or if someone else is more intriguing in our GH Poll: Moving On.

Sonny’s emotions:
People may want to dismiss Sonny’s feelings and hurt because of the business he is in. But it was hard not to feel sorry for him when he was bumming at Kelly’s over all the crummy things that have happened to him lately – Kate’s takeover by Connie, getting left at the altar, Kristina’s near death, Jason’s death, his business mess, Bernie’s death. And this coming off of his $18 million dollar loss to Jerry. Rough couple of months for sure. Not sure if his table-flipping at Kelly’s was an homage to his “Real Housewives of New Jersey” neighbors, but between that and his stints in the gym, he is trying to work through his emotional pain physically.

AJ’s return:
Once AJ got back in town he certainly wasted no time in revealing himself to his son, despite Monica’s pleas to leave town before he was caught. After all, like she told him, if he is found to be alive she could be thrown in jail for abetting him after the fact. It was too funny that he demanded Michael to keep his secret, especially from his mother, then turned around and revealed himself to Carly about five minutes later. Ugh. Meanwhile, Michael ran home and told Starr right away. This is definitely the worst kept of all the secrets floating around Port Charles right now. In other AJ news, was anyone else surprised how well he fit in his childhood grim reaper costume? That was almost harder to believe than the story of how he didn’t die.

Steve’s secret:
Monica explained that she was able to get Steve to go along with her plan to save AJ and get him out of the hospital unseen. In fact, devious Monica insinuated his job depended on it. He seems to have a bit of his mother in him when it comes to keeping secrets.

Learning the truth:
Steve was able to bring some good news to Sam this week, and it was wonderful that we got to see her ecstatic and able to tell Jason the truth about his fathering Danny. But once her vision of him was gone again, it almost hurt worse than the first time. It seemed, almost, that she was starting to realize that Jason might not be coming back. Meanwhile, the baby playing Danny is still the cutest little cut up on screen.

Halloween treats:
Who doesn't love a good costume? Lulu looked incredible in her sexy cheetah costume complete with leather pants, and so did Maxie in her goddess gear. Luke and Tracy were a hoot in their powdered wigs and red lips, especially when flapper Anna called him out for spying on her. Duke played the bartender pretty well, and even Tracy had to admit he poured a passable martini. Ellie's DNA getup was right on trend considering all of the double checking her lab has had to do lately. Carly's farmer outfit with little Joss as an ear of corn was super cute, as was Patrick's race driver outfit. But poor Sabrina and her huge grape outfit and purple face - doesn't she know she needs to try a little harder than that to grab a guy's attention?

Is Mila Kunis hiding a baby bump? Find out in Soaps.com's Celebrity News. Emily is letting people get closer. Find out if she is making a mistake in Soap Opera Fan's Revenge recap: Forgiveness.