Todd and Diane:
Now that Heather is off in her coma, Todd needed another firecracker to spar with, and there is none better to fill in than Diane Miller, back and brash as ever. This week proved what great sparring partners these two can be, and now that they are scheming together to get the secret of Sam's baby's paternity known without being linked to it all is just setting it up for more fun moments to come. But will Todd actually get away with it all? Vote in our GH poll: Tricky Todd or let us know in the comments what you think.

Trey:
It has taken a while to warm up to Trey, and in some ways it is not all the way there yet, but there is no denying the pain he was in as his father died in his arms. In a way, the idea of his father has been dying for a while now as it became more and more clear what kind of dirt Joe was dealing with. I couldn't help but agree with him when he called out Sonny and Alexis on their horrible timing in coming to him to commit Connie.

Crazy Connie:
Talk about rough weeks. Connie seems to be totally going off the rails - hitting on Michael was just too much. She got decked in the face from both Carly and Starr because of her behavior, but the best moment might have been Todd physically lifting her up and tossing her out of his room. Classic. Not sure how long it will take Trey to commit her, but it has been fun having her around for as long as we have.

Lulu's humor:
Glad to see Lulu has not lost any spunk after finding out about her medical condition. Not only did she hire Duke to keep tabs on him for Luke, her little snarky looks as Ellie charmed the pants off Maxie were priceless.

AJ's return:
If you hadn't heard about the return of AJ Quartermaine before Friday's episode, the constant mention of his name the few days leading up to the reveal would have been enough clues to make anyone suspicious. Monica barking at Michael about his father was out of character, and now that we know she has been hiding the fact that AJ is alive, it begs to wonder what other secrets she is hiding.

Sean Combs was in a bad accident this week. Find out if he is okay in our Celebrity News. In other music news, rapper Ice-T and his wife Coco are back for another round of their reality show, "Ice Loves Coco." Read about the upcoming premiere in Soaps.com's Reality TV Rush. 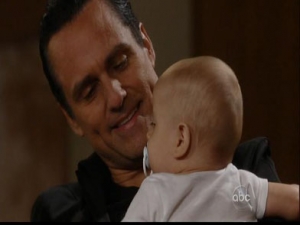 There wasn’t much hope for a happy week in Port Charles when the first thing that happened was Duke kicking Jason into the water, marking the last time we will see him for who knows how long. However, there were a few bright spots thanks to crazy Connie and her reign of tacky terror.

Ian:
It’s hard not to feel bad for actor Ian Buchanan. First, they brought him on “DOOL” where he broke up Kate and Stefano. Now he is back in Port Charles and he is the ultimate bad guy, taking out beloved characters in his wake. He has kidnapped Robin, who is now comatose thanks to Ewen. He orchestrated the entire Kristina and Trey fiasco, which resulted in the death of a number of people. Joe Jr. is gone, and Tracy may have said it best when he died – what a waste. But worst of all is Jason. Duke shot him in the back and just kicked him in the river. He even gave Bernie his final shot, may he rest in peace. Now that he is hired on at the Haunted Star, let’s hope we get to see him sling a few drinks for some thirsty patrons before getting back to his bad deeds. One thing is for sure, he certainly has lurking refined to an art.

Anna’s skills:
They are making Duke so incredibly evil it is hard to think he can string Anna around for much longer. If she can’t figure out that he is involved in all of this crime her skills as the police commissioner should be questioned. Not that Mac would want to take time off from all of his strip pool playing at The Floating Rib to take back over.

Sonny and Danny:
Probably the biggest fan outrage has been over the fact that Jason was not allowed to spend one happy, reunited night with his family before the shooting at the pier. And he never got to introduce Danny to some special people in his life, like Sonny. So despite Sonny having to deliver some hard news to Sam, it was nice to see him spend some happy moments with the baby too. Meanwhile, Danny is one of the most easygoing babies ever. So cute.

Sam’s search:
Without batting an eye, Sam kicked into crisis mode in her search for Jason as soon as Sonny told her he had been shot. She got in a wetsuit and searched for him until she found the phoenix figurine. Nothing has shaken her faith in the fact that Jason is still alive, and why should it? No one backed her up when she thought her son was still alive, and here she is months later with Danny in her arms.

Grieving for Jason:
Everyone grieves in their own way, and one way Carly does it is by lashing out at others. And she really gave it to Sonny when she did not think he gave the appropriate amount of time to grieve over Jason before moving on to his next problem – committing Kate. Carly has always been a bit possessive of her love for Jason, almost as if no one else can love Jason like she does and if they attempt to try, she will find a way to call them out on not living up to the expectations she has. But there is no doubt Carly and Jason had a true love, friendship and respect for each other. Jason had the same kind of mutual respect and love with Sonny, who was his most vulnerable when he dove into the water, looking for Jason in the chilly waters without the protection of a wetsuit. He will carry the guilt of what has happened for a long time.

Joe’s lie:
No matter how great Trey’s childhood may have been and how much Joe protected him from his gangster ways, all of that work was totally unraveled in the last few months of Joe’s life as he got Trey totally entangled in his mob revenge fantasies. The worst of all was telling Trey on his deathbed that Sonny killed him, a total lie. I guess Joe could have been justifying it, like Sonny was responsible in the sense that he was the object of Joe’s revenge. Trey summed it up the best when he was talking to his dead father – “Do I avenge your death? How do I even begin?” If you don’t know, you might not want to start now.