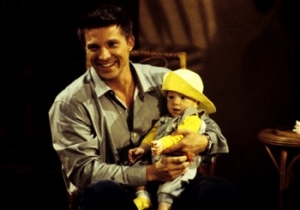 Jason takes in Michael as his own.

As Tracy mentioned to Monica in Monday’s episode, Jason accepting Sam’s baby (who he falsely thinks is Franco’s) as his own isn’t a first for the mobster. The first boy he cared for was Michael Corinthos III.

After Jason Quartermaine’s life altering car accident in 1995, he changed his name to Jason Morgan and pushed away everyone from his former life. He moved into a room above Jake’s and began sleeping with Carly Roberts. He started falling in love with Robin Scorpio and ended his dalliance with Carly, but as everyone who watches “GH” knows, the two remained close friends.

Upon sleeping with A.J., Carly became pregnant, but tried to pass the baby off as Jason’s. Jason knew he wasn’t the father, but agreed to keep up the ruse so A.J. and the Qs wouldn’t get their hands on her son. In 1997, Carly gave birth, but suffered from postpartum depression. She took off, leaving Jason to care for Michael on his own.

Jason named the boy after Sonny, whose given name is Michael, and developed an early bond with the boy. Robin initially helped Jason, but never agreed with the decision to keep A.J. in the dark.

Carly returned to Port Charles and moved in with Jason, Robin and Michael. Carly and Robin butted heads on a regular basis. Deepening Carly’s hate for her, Robin eventually told A.J. the truth and left town.

Jason remained a father figure to Michael until he was shot, pushed into the water and presumed dead. Like he did with Michael, Jason was prepared to raise little Daniel as his own, despite thinking Franco was the biological father. There’s no doubt he would have been a great dad, but it leads one to wonder how he would have reacted had he known Danny was truly his own flesh and blood. Maybe one day Jason will return from the presumed dead to show us.

Do you remember when Jason cared for baby Michael? Share your thoughts on the storyline below.

Get a little background on Greg Vaughan’s (ex-Lucky) new character in Soaps.com’s Flashback in DOOL History.

Read about the “Home and Away” character who becomes pregnant before she’s ready in Soap Scoop: UK/Australia Edition. Find out what happened to Amanda’s baby in Soap Opera Fan’s Revenge recap.

General Hospital Poll: A Friend In...