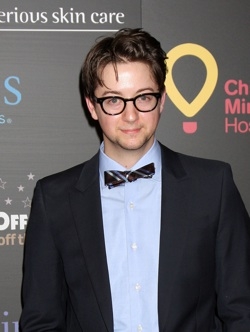 Spinelli is currently pursuing lab tech Ellie, who appreciates his offbeat personality and is even a bit different herself. It’s been a while since Spinelli has had a real love interest, aside from Maxie, especially one that makes his non-wife so jealous. This happened in 2009, when Spinelli met the first real threat to Maxie’s place in his life.

Spinelli met Winifred Leeds, who was a huge fan of the online game he created based on Stone Cold. She also turned out to be his cyber equal, so they bonded on a level he and Maxie never could. At this point, Spinelli had fallen for Maxie and they had sex, but she was being flaky by flirting with and kissing Johnny Zacchara.

Winifred’s presence in Spinelli’s life woke Maxie up, as she became extremely jealous. She went so far as to sleep with Spinelli in order to distract him from Winifred. Spinelli eventually realized why she seduced him, putting them on the outs. However, Maxie was still wary of Winifred’s interest in The Jackal and warned him against her.

Maxie’s fears came true when Spinelli was arrested for violations of the Homeland Security Act. It was revealed Winifred was an FBI agent using Spin to take down Sonny and his crime family. Spinelli got out on bail and after the whole biotoxin spheres episode, Winifred, who developed real feelings for Spinelli convinced him to skip town in order to avoid prison since he wouldn’t help put Sonny away.

While on the run in California, Spinelli got mixed up in an art heist, but Winifred, Maxie, Jason and Sam saved him and nabbed the bad guys. After taking credit for bringing down the art thieves, Winifred was promoted within the FBI, enabling her to help Spinelli destroy the evidence against him. Afterwards, Winifred’s presence in Spinelli’s life lessened and he and Maxie became closer than ever. They even planned to get married, but we all know how that turned out.

Spinelli and Maxie have been separated for quite some time now and Maxie is married to Matt Hunter, who happens to be in prison. But Spinelli’s interest in Ellie is making Maxie once again reconsider her feelings for Spinelli. Last week, she told Lulu she was ready to make a life with him, but is that true or is she just jealous she’s not the center of his universe anymore? Share your thoughts on Spinelli’s love life below.

Relive Billie’s last go around in Salem with Soaps.com’s Flashback in DOOL History. Are you a fan of Lucy Liu’s latest red carpet outfit? Check it out in Soap Opera Fan’s Star Gazing.