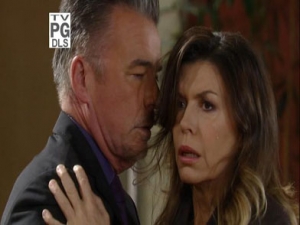 Not that Anna has much time on her hands for love these days, what with Joe Jr. on the loose and Heather Webber busted with the baby, but she found herself in the middle of one humdinger of a love triangle this week with not one, but two men arriving from overseas to stake claim on her heart. Luke, a fairly new but long-in-the-works affair with some problems to overcome. Or Duke, the long thought dead husband, back with words of love and promises for the future.

Which man should Anna choose? Let us know by voting below and check out the latest General Hospital Weekly Blog for more about everything that happened this week in Port Charles.

The plot thickened on "Revenge" this week. Did you miss it? Read our Revenge: Dark, Even For Emily recap. Can't get enough of the Lohan mama drama? Read about the latest dust up in Soaps.com's Celebrity News.