Regret:
This emotion was a dime a dozen this week in Port Charles. Everywhere you turned there was another sad sack wallowing in what might have been. Carly regretted giving Johnny a second chance - or at least she should have. Liz regretted her lies to Jason and at least revealed the truth. Todd regretted lying to Carly and Johnny regretted, well, just about everything he has done since shooting out Anthony's tires. Of course, Tea regretted hiring "Susan Moore" as Victor's nanny and Tracy regretted giving Joe Jr. a second chance. If we are leaving anyone out, please let us know in the comments.

The missing baby:
So Heather is off with baby Daniel/Victor now that almost everyone knows the truth. Here's hoping it won't take long to find the lunatic. Also wondering how McBain is going to let Tea know that little nugget about the baby not being hers while they are in the search. Brutal. He should have taken Jason up on his offer to be the bad guy and break it to her himself.

Carly:
Once she gets over the shock of her beloved Johnny, whom she has defended to everyone - including Jax who she divorced just for Johnny - she got mad. Real mad. She slapped him and then when she saw Todd, slapped him too. Seems like he could take a million slaps from her if it meant spending more time with her. He is going to have some real explaining to do in short order and Carly, she might as well take a permanent break from men. And what was with Todd offering her the couch, and not his bed? Come on.

Family feud:
The Cornithos/Scully battle is about to really heat up, and it appears Trey will be taking Sonny's side - that is if Joe doesn't get to him first.

Man feelings:
The men in Port Charles really let their emotions rip this week, with each actor choosing the range their character went, from Johnny's wounded indifference to Trey's near-hysteria. Which manly emotional breakdown was your favorite? Vote in our GH Poll: Sad boys.

Kelly Monaco on Dancing With The Stars:
First of all, it was super fun to watch a snippet of Kelly Monaco's cha-cha-cha in the scene where Carly and Johnny were getting ready for the wedding. But second of all, it was no fun watching Kelly land in the bottom last week on "DWTS." I'm pulling for her to make it to the end. She looks amazing - hard to believe is was nearly eight years ago when she won the first time!

Which couples make it and which ones break it? Find out in our href="http://soaps.sheknows.com/glee/update/id/16389/" target="_blank">Glee recap: The Break Up. And be sure to read all the latest dish on the Nicki vs. Mariah fight on "American Idol" in Soaps.com's Celebrity News. 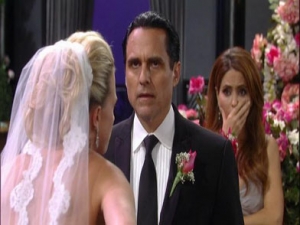 It was wedding week in Port Charles and Maxie – while making sure everyone had their crab appetizers – really pulled together a lovely ceremony given the location was in The Haunted Star which was supposed to have just been totally looted during the epidemic. And just like any other Daytime union, the coming together of Sonny and Kate did not disappoint.

Connie’s reveal:
Some posters had guessed last week that the secret deal between Connie and Johnny was a marriage, which not only prevents Sonny from having Connie committed, but now the two of them will not have to testify against each other in court, which is sure to put a kink in justice for Cole and Hope. In fact, nearly two weeks ago, Scrimmage said, “What if it’s a marriage license, but not for a fake or prior marriage? What if Connie intends to dump Sonny at the altar, and marry Johnny? That’s why she’s having the wedding at the Haunted Star so that Johnny could be there. Surely he wouldn’t have been invited. That kind of public humiliation would almost certainly drive Sonny away for good, and as for Johnny’s motivation, a real marriage would mean Connie couldn’t testify against him. Genius!” Right on Scrimmage!

Steve’s stupidity:
Who else wants to smack Steve? Could he be more insulting to Olivia, who has proven him wrong over and over again? When she overheard him telling her own son that she may need to head back to Shadybrook because of her suspicions that Kate was really Connie – when everyone else should have noticed it too – was ludicrous. Oh, and then when he jumped up at the wedding to let everyone know she hasn’t been feeling well when she tried to stop the wedding. He has shown her absolutely zero support and that Falconeri needs to kick him to the curb. But instead she gave him takeout and sex.

Starr’s revenge:
While it is kind of understandable that Starr went ballistic on Connie at the wedding reception, it is a little off considering her earlier stance that victims of DID are just that – victims. She even gave that impassioned plea in the courtroom in an effort to save Kate. So now, instead of wanting to help Kate be free of Connie or get the help she needs, Starr wants her to be punished. And not only that, she has invoked the wrath of Todd to help her out. Not that he is going to considering how wrapped up in Johnny’s troubles he is. Todd is actually in quite a pickle all around, so it will be interesting to see how he tries to weasel his way out of all of it.

Wedding attire:
Other than the too-big bloom Dante tried not very successfully to pin on Sonny’s lapel everyone looked pretty sharp for the ceremony. Loved Connie’s ass smacking routine in the short, tight gown Kate would never wear.