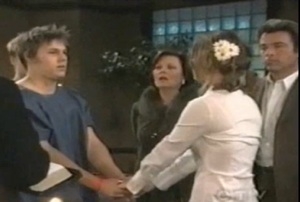 Dillon and Georgie get married.

In 2006, an encephalitis virus spread through Port Charles. The hospital was overrun with cases, as the virus claimed the lives of Tony Jones, Courtney Matthews and Sam’s brother Danny.

Teenager Dillon Quartermaine also fell victim to the virus. His devoted girlfriend Georgie Jones stayed by his side and, believing he was going to die, Dillon and Georgie decided to get married.

On February 14, 2006, a disapproving, but sympathetic Tracy and Mac stood by as Georgie and Dillon became husband and wife. Dillon made a miraculous recovery and the two tried to make it work as a married couple. Aside from their young ages, the newlyweds dealt with Dillon getting cut off from the Quartermaine money, working to support themselves, and interlopers Lulu Spencer and Diego Alcazar.

The two ultimately got divorced, Dillon left Port Charles to pursue his film career and Georgie was sadly killed by the Text Message Killer, a.k.a. Diego Alcazar. But in 2006, the two were madly in love and a favorite Port Charles teen couple.

What else do you remember about this storyline? Feel free to fill in the blanks below.