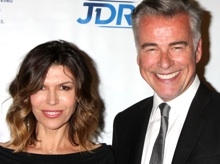 As viewers saw a few weeks ago, Duke Lavery is back and with his old face. For those who don’t know, Duke left town in 1989, changed his face and returned to his love Anna Devane before his death in 1990. Or so we thought. According to executive producer Frank Valentini, nuDuke wasn’t Duke after all, but an imposter.

However, the original Duke still had ties to the mob despite being married to then Port Charles’ police chief and super agent Anna Devane. It remains to be seen why Duke is back, why he has Robin and where he’s been, but the first time he left in 1989, he was under threat from the mob he had dealings with.

How did the real Duke Lavery make his exit from Port Charles in 1989? Vote and comment on the storyline below.

Catch up on why Emily is hell bent on destroying the Hamptons' finest in Soap Opera Fan's Revenge Season One Recap and whose life Walker wants to destroy on "Hollyoaks" in Soaps.com's Soap Scoop: UK/Australia Edition.

General Hospital Poll: Which A.J. Do...