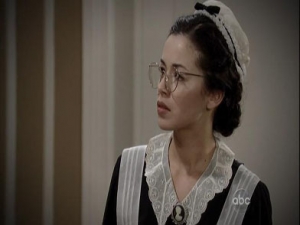 New General Hospital staffer Sabrina has quite an imagination. So vivid, in fact, she keeps getting caught totally checked out of reality. And while it’s hard not to want to shove a bowl of oatmeal into the face of the other new woman around the hospital, Dr. W, Sabrina’s daydreams might be going a little too far.

What do you think about the wanderings of Sabrina’s mind? Let us know by voting below and check out the latest General Hospital Weekly Blog for more about everything that happened this week on “GH.”

[crowdsignal poll=6564248]
What do you think of Sabrina's daydreams?

Read our Revenge season one recap before the new season premieres. And which former Pine Valley resident won an Emmy? Find out in Soaps.com's After The Soap Finales: Where Are They Now?