General Hospital: Kelly Monaco Does The Cha-Cha-Cha On DWTS

The pilot for "Ben and Kate" airs tonight. Find out more about it in our Primetime Dish. Don't forget to check out the Soaps Digest Column for our take on what happened last week on Daytime.

For Kelly Monaco’s (Sam) return to “Dancing with the Stars,” she performed the Cha-Cha-Cha with partner Val Chmerkovskiy. Her TV family Nancy Lee Grahn (Alexis) and Lindsey Morgan (Kristina) were cheering from the audience. The judges gushed about her. Carrie Ann and Len gave her 7s, while Bruno gave her a 7.5. You can read the full Dancing with the Stars recap at Reality TV Magazine.

Here she is, along with the other all-star contestants, asking for your vote. What did you think of her performance? 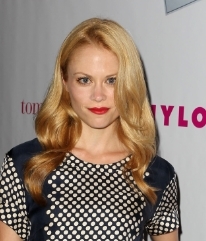