The baby chase:
How exciting that Jason and Spin are finally getting somewhere in regards to finding Sam's baby. And while he is fighting to give her something she loves and needs, she is signing divorce papers minutes after going to tell him she was having second thoughts. Age 87 says, "She is going to be eating a lot of crow by the time the truth will come out. She has been making her own situation worse when it comes to Jason. How about Sam slowing down a bit and not acting on pure emotion? That's what she has been doing for months now and it's tired now."

New loves:
And just as Maxie thinks Spin might be just the right person for her, he meets the uber-adorable Ellie. Ellie Spinelli anyone?

Pull the thread:
Todd and Johnny are in some serious hot water. Totally loved Todd overhearing Steve on the phone about Heather and without one word, look or comment high-tailed it out of the hospital to start doing damage control. Meanwhile, Jax is on to both of them and with Johnny recovering from a bullet to the gut and Anna on Todd's butt, these two are on a quickly sinking ship. Can't wait to see how they each worm, scratch and claw their way out of it.

Unlucky-in-love Liz:
It's been a rough one for Elizabeth. Coming off her dalliance with Dr. Demented, she has finally come to terms with her never ending feelings for Jason and works up the nerve to tell him. They share a kiss, things look good and then, wham. He shoots her down with the excuse he does not want to put the kids in danger. Jason seems to really care for Liz and they have deep history, so this doesn't seem like any line, simply what he feels is the truth. However, if he felt that way about Liz, it's hard to think he wouldn't act on it. Maybe.

RIP John Ingle:
When John Ingle popped into General Hospital during the health scare, it was great to see him on screen, and also bittersweet when word spread he died just days after what turned out to be his last appearance as Edward Quartermaine. Mamajj says, "We lost an amazing man. He will truly be missed." We couldn't agree more.

Same show, new time:
How is "GH's" new time slot working out for you? Vote below and let us know in the comments.

Will Honey Boo Boo be back for a second season? Find out in Soaps.com's Reality TV Rush. You can also find out where ex-"Y&R" actress Eva Longoria, "Dallas" star Jordana Brewster and "B&B" alum Jack Wagner were spotted in the latest Celebrity Sightings. 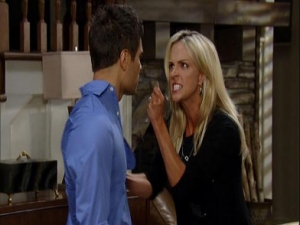 The germ party is over, but relationships are on the verge of exploding in all directions – good, bad and very ugly. But finally, some new staff at “GH!” Our posters have not been shy about telling it like it is, so we have included a few of their thoughts as well in this week’s analysis of the goings on in Port Charles.

Connie’s Back!
With Heather taking up the slack for almost all the crazy in Port Charles lately, it was so wonderful to see Connie back and in fine Bensonhurt form. She is on a crusade, and there is no telling when Kate will come back. Connie has been a very busy girl, making secret pacts with Johnny, dispatching Maxie to plan a tastefully tacky wedding and lurid bachelorette party and keeping the fact she knows about Trey a secret, all while pretending she is Kate. Not that she is doing a very good job at that. At least Olivia’s powers of perception are still on point. The fact that she is the only one who recognizes Connie reinforces their familial bond and history. However, the fact that Sonny doesn’t see it is totally mind blowing considering Kate and Connie don’t even have the same accent. Here’s hoping she makes it down the aisle in that leopard print and cleavage before this all blows up. Midas says, “Maxie shouldn’t find it too difficult to outfit KatCon for her wedding. Just bust out Sonny’s credit card at the nearest Wal-Mart, K-Mart or Dollar Tree.”

Sympathy for the devil?
With all of his in-your-face antics early on, Trey has not always come off as the most sympathetic character, but when Connie laid into him with some of the cruelest things a mother could ever say to her child, it was hard not to be moved. Cowboy fan says, “Never thought I would say this, but I actually felt sorry for Trey today. Connie was so mean to him. It’s not his fault his father raped her. I’m not so sure he did.” Guess what? We’re not sure Joe Jr. raped her either. With Kate and Joe both sticking to their stories, Connie could be the person to clear this up. But will she? Let us know what you think and vote in our GH Poll: The truth about Trey. However, not everyone is feeling the love for Kate’s son. Texastwin says, “I don’t feel sorry for Trey concerning his mother. When he first came to town he was always filming Kristina’s family during private and painful moments with no concern for their feelings. He sure would not like a camera in his face when he was confronting his dad yesterday.”

Marriage made in mobster heaven:
Now that Kristina and Trey are married and consummated, their Romeo and Juliet storyline is going to be on a roll. How can you not love the tension and potential mob war this is going to cause? Trey is going to find out very quickly just how deep daddy’s mob ties lie. Plus, after the blow about his mother and new distrust for his father, he needs someone to cling to and that person is Kristina. The more Sonny tries to tear them apart the tighter they are sure to hold on.

Romancing Joseph:
Tracy may have kicked Joseph to the curb for now, but her feelings are too strong to keep him away for long. However, one of the best aspects about this storyline has been the increased interaction between Monica and Tracy. These two trading barbs is classic, especially coming off their somewhat tender moments at the hospital during the crisis. They may not always like each other, but these two have a fascinating bond. Cynic says, “The Q’s are just priceless and we have been without them for far too long.”

Fresh blood:
Nothing like a medical crisis to impress upon a hospital they might need more than two doctors on hand when things get hairy. Enter ugly-duckling Sabrina with a super size crush on Patrick, along with Dr. W, a sophisticated and sexy doc with an attitude problem. Hmm. And just when things with Robin are bound to get interesting.

General Hospital Weekly Spoiler Video: Is It Too Late?