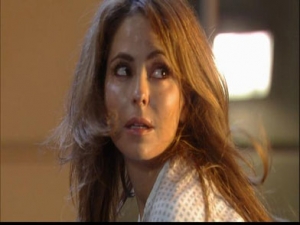 Now that Port Charles has been saved by the evil pathogen you would think things would be slowing down to a much calmer pace. Not so! Sam’s swapped baby storyline is just heating up, and so is Kate’s. The residents may have avoided certain death but destruction for some seems to be on its way.

Sweat suits:
Everyone is running an extremely high fever and complaining about how hot they are, even passing out from it. Yet, Sonny, Jax and Todd never once took off their damn suit coats. Really? It was almost distracting that they kept them on. Meanwhile, Johnny has on a loose-fitting shirt but it is covered in crazy sweat stains.

The baby!
So Tea hired arguably the worst nanny in history to care for little Victor/Daniel. At this point it doesn’t seem crazy Heather has an end game in mind other than snatching the baby at some point. If she doesn’t leave soon she is sure to be caught by cops looking for her for murdering that nurse. And finally – finally – someone is seriously putting the pieces together about finding Sam’s baby. What will the show do without Jason considering not one person on the medical staff at General Hospital (ahem, Steve) even thought to question the fact the blood types were off and medical conditions appeared and disappeared out of nowhere. Very disappointing, Dr. Lee!

The Falconeri girls:
Impending death has a way of creating some very heartfelt scenes on soaps, and the exchange between Olivia and Kate was sweet and cute, if not a little sappy. And when they were each making out with the “loves of their lives” while getting sprayed with antiserum was certainly a little much. And seriously, how can Olivia think Steve is the love of her life. That LSD certainly is hard to shake!

Jason and Liz:
It is hard not to analyze every scene with Jason, whether he is with Liz or Sam. Knowing he is leaving it seems these two are getting closer while he and Sam are finally finding some closure. Most people lost the last 20 minutes of the show on Friday, so it is unclear what Liz said to Jason when she finally sat him down, and what he said in return. Drama!

RIP Cook:
Never seen but always talked about, nameless Cook will certainly be missed. We even have Cook’s chicken tarragon to thank for Tracy’s first run in with Joe Jr. One of the pathogen’s only casualties, someone had to go and her time was up.

Sweet Emma:
This week was certainly more exciting than emotional, but when Emma asked Patrick if they would get to see Mommy again if they did not get better was too much! This little girl can act and her interaction with Patrick makes him come off more sympathetic. It was great to see Edward Quartermaine pop in for a brief visit and his gift of life for the little girl.

The Warehouse Crew:
Formerly known as the One-Percenters, Carly and her group of past, current and potential suitors could have been played better. These scenes were not as dynamic as they should have been considering the group that was hanging out together waiting for Jerry, but it certainly got things rolling with Jax, who is sure not to leave Port Charles until he finds out what Johnny and Todd are hiding. Plus, it was awesome seeing Shawn in action and him and Sonny hitting the waves on a boat.

Lucky cut:
Thanks to a well-timed phone call by Natalie, McBain was able to successfully cut the red wire of the bomb, inspired by her hair color. Interesting how much they try to impress that McBain loves Natalie and Liam while simultaneously pushing him and Sam together.

Kate's baby daddy problem:
Just as Kate and Sonny have decided to move full force toward a blowout wedding in Port Charles, her world is about to be turned upside down with the return of Trey, her supposedly long-lost son, with his dad and her rapist, Joe. Michael knows the score, and between his and Starr's suspicions, this is about to be blown wide open. What do you think will happen to Kate and Sonny's wedding? Vote below in our General Hospital Poll: Sonny and Kate's wedding.