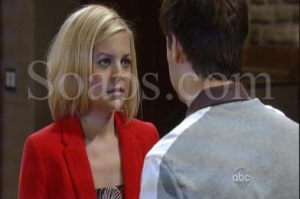 The illness rages on in Port Charles, with the residents getting sweatier and more desperate for the antiserum by the minute. But that’s not all that happened this week. Heather is out of Ferncliff and in Llanview with Tea and Sam’s baby. This is about to get interesting! This week Soaps.com readers are also weighing in on what they thought about this week’s happenings too.

Maxie’s return:
You could practically hear the roar of applause as Kristen Storms stepped back into Maxie’s shoes this week on “GH.” Gone for months, audiences unfortunately never really warmed up to her replacement, Jen Lilley. Not only is it great that Storms is feeling better, but it was super fun watching her in Sam’s dream, running the baby shower and smooching with Spin. It will be interesting to see what kind of storyline they give Maxie now that she is back, something for her to tangle with Spin on. Her part in Robin’s “death” will have something to do with it.

The One Percenters:
The gatherings of the millionaires were some of the best scenes this week, bringing together a host of characters we might not normally see together, like Tracy and Todd, who played their roles perfectly. Johnny, the so-called reformed mobster calling up a goon to bring him the cash buried next to some dead body – but not all of it and certainly not in a bag. Briefcase only. Carly, getting egged on by Todd to use Jax’s money without telling him since they are still legally married. Like he said, it is easier to ask forgiveness than permission. Sonny, with his coffee cash. Tracy with her dad’s money. And of course, their ringleader Todd delivering line after comedic line.

Heather’s back!
As crazy as Heather has been with her BLT obsessions and iced tea incidents, her scene with the nurse in Ferncliff was stellar even for her. Her struggle to make something right with Steven was touching – until she knocked out that nurse and stomped on her head! Villain to the core, she is off in Llanview to create her very own do-over. This direction would be more worrying if Jason wasn’t starting to dig around about the authenticity of the death of Sam’s baby. That, and the fact the cops should be on her tail for the murder of the nurse as we speak.

Sam’s storytelling:
Sam’s story was touching and wonderful and heartbreaking for many reasons. The biggest one being the departure of Steve Burton as Jason in just a few weeks. But while it gave a bit of closure to fans of Jason and Sam, for others the sequence was just out of place during this fast-paced week. “If they were going to do something like that, it should have taken place after the tainted water deal – where cheating death could have led to re-evaluations or what could have beens,” says Samhaincat. “If death was imminent – the ‘what ifs’ wouldn’t have played out anyway because everyone would be dead.” What did you think about the dream sequence? Vote in our GH Poll: Sam’s fantasy.

Jason/Liz/Sam:
Talk about unresolved feelings! Jason and Liz have such a connection, one that can never be broken because of what they have lost together. And guess what? Jason and Sam have that same connection! Sam has John to fall back on, but poor Liz – with Ewen gone and Jason about to leave, they need to introduce a new prospect soon. “Loved the Jason and Liz scenes, Jason knowing something was wrong without Liz saying a word and drawing her back as she stepped away,” Ranshoma says. “Loved Sam and John on the floor, her melting in his arms, their faces inches apart. Sexy!”

Ewen's confession:
We learned quite a bit about Dr. Ewen Keenan this week, some of which made him more sympathetic. However, that doesn't mean that couldn't have come down the road. It is sad he devoted his life to avenging his father but in the process only ended up robbing himself of a life of his own filled with love and his work.

Inoculate vs. antiserum?
Is anyone else confused as to why the injection of the inoculation into Joss and Alexis practically killed them while Tracy sipping the antidote had her fit as a fiddle? Why would Jerry put them through that if the cure was so painless?

Jax and Jerry:
Jax simply refuses to let go of the fact that Jerry is a bad person no matter what evil deeds he does. Not sure how many parents would still forgive the person who kidnapped their daughter in the middle of the night to inject them with some chemical that almost killed them, no matter the end result. "The whole Jax breaking his brother out was annoying," ashuri-chan said. "I am so sick of him thinking there is a part of his brother that is decent. And how in the world could Joe get Jerry out without being seen? And then when the "one percent club" came, all I saw was police walking around like everything was okay. And what about the cop Jax locked up, is he still there or what? What about an APB out for Jerry?"

Wondering if Kristina is having any regrets about her quickie marriage to Trey? Find out in Soaps.com's interview with Lindsey Morgan. Find some laughs among all the Daytime drama in Soap Opera Screen captures.