Joe and Tracy:
Could it be the mobster actually has a heart? The way he looked at the picture of Tracy in her house and commented that she has always been a knockout makes me wonder what kind of history he might have with the Quartermaines. When he pushed the water on Tracy that would save her life, forgoing any for himself, he really put himself out there as being not all bad. He better be careful or he is going to lose that tough guy image.

Doomsday sex:
Lots of chemistry flying all over the place as the residents of Port Charles are somehow able to get busy among coughing fits and sweaty high fevers. Gross. Even Molly and TJ are considering crossing it off their bucket list. I guess we can expect some new characters being introduced in about nine months from now.

Todd and Jax:
It seems Mr. Manning has quite a bit of a man crush on Jax, and who can blame him? Now that he is back on the screen these other men need to step it up. Jax is tall, handsome and caring with a sense of adventure and piercing blue eyes. And, like Todd said, gave him the best handshake he has ever had. Not sure how long he is in town for but here is hoping he lasts longer than Jerry's disaster storyline does.

The out-of-towners:
It is good to know that along with Spinelli, Starr, Michael, Kristina, Trey, Luke and Anna, Liz's kids are off at Disney this week and Sam's baby is still safe in Llanview. Too bad Emma is not tucked off safely somewhere either. No more sick kids please!

Jason, Jerry, Jax and John:
More of this please! Strong men are always welcome on Daytime. And with Jason about to leave we need as much time from him on screen as possible to resolve all of his storylines. How do you think Jason will leave the show? Let us know in our GH Poll: Jason's exit.

Jason/Sam/John/Liz:
Now that we know for sure that Steve Burton is leaving GH, it's time to start speculating about how this foursome ends up. Obviously without Jason around the door is wide open for a McBam pairing, but wouldn't that be just too easy? But how will his leaving affect Liz? this juicy storyline has so many ways it can go as long as Liz can escape from evil Ewen.

Lots of babies born this week - find out to who in our Reality TV Rush. Do you think Hope is too good for Liam on "Y&R?" Let us know in our Soap opera polls. 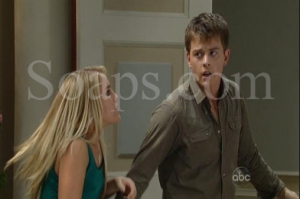 Things are getting very real in Port Charles. The water is toxic, people are coughing all over General Hospital (yuck!) and Joe Jr. is … falling in love? Wow.

Michael’s rage:
When Michael took Trey down in the chapel, it was a pretty brutal wake up call for Starr about what Michael has been through. His rape in prison was a very big deal and of course would affect any future relationships he has. I wonder if he is going to tell her everything and we can really delve more into this storyline or if the flashback he had in Vegas is all we are going to get out of this. For Michael and Starr to really move forward I hope he tells her everything because she will be nothing but supportive.

Jerry’s motives?
So Jerry wants a lot of money, but why? Is there some kind of cure to his ailment that only $88 million can buy, or is the request really code for something else? We learned that the number represents the dead man’s hand, but if Jerry stole the cards like the told Jax he did, what is he after now? Plus, it was very sinister of Jerry to suggest to Alexis that he could save everyone if she spent one last night with him, and when she agreed, only to tell her that wouldn’t even come close to fulfilling what he needs. Harsh!

Duke vs. Luke:
What a pickle Duke’s return will provide Anna, who is only going to get closer to Luke in the month or more it will be before Duke comes back on the scene. Duke’s brief appearance in Switzerland raised so many questions. First of all, why would he take Robin and hide her from Anna, one of his great loves? Is it possible he found Robin and is “fixing” whatever Keenan and Jerry did to her before he gives her back? If not, what is his connection to Jerry and why would they be working together? Meanwhile, Luke’s revelation to Anna about his lie to Robert is more sad than bad and shouldn’t be a deal breaker. Now she is off to Port Charles without knowing what is going on and Luke is off to find Robert and tell him the truth. Regardless, this storyline should be fun for the fall.

The new Mrs. Trey Mitchell:
Trey was almost starting to be a little sympathetic, but then he brought out the sleazy producer again in front of Starr and Michael, and Kristina is going to be so sorry she didn’t listen to all of the people who love her. She even asked him to swear on a bible that he didn’t lie to her and when he wouldn’t do it under the guise that they should “trust each other” she should have walked to the nearest annulment office. Way to do your homework everyone. As soon as Michael tells Sonny, these chips should start falling in a hurry.

Johnny’s hair:
The New Kids on The Block called and they want their do back. It was hard to watch him go toe to toe with Todd when he looked so ridiculous. 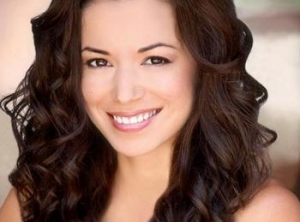