Ian Buchanan Back To General Hospital 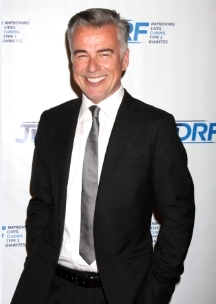 Back from the grave.

Ian Buchanan just wrapped up his stint as evil Ian McCallister on “Days of Our Lives” last week, but he’s already leaped to another place on the Daytime schedule. The actor has returned to the role of Duke Lavery on “General Hospital.” Buchanan originally played the part from 1986-1989. After that it was taken over by Greg Beecroft.

The character’s surprise return was revealed on Monday when he popped up as a doctor at the Swiss clinic where Anna (Finola Hughes) was searching for Robin (Kimberly McCullough). For the sake of confused fans who were under the impression that Duke had been dead for years, executive producer Frank Valentini explained to TV Guide Magazine, “We will eventually find out that the Duke Lavery we saw die all those many years ago was an impostor. This is the real Duke.”

Don’t expect to see any more of the returning character for about five weeks.

To find out who is having major issues with their feelings back on "DOOL," check out our Soap Spoiler Digest. And be sure to read our Pretty Little Liars finale recap.