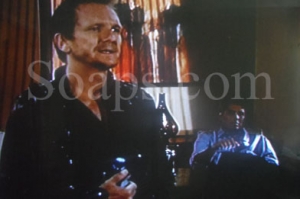 It was another incredible week in Port Charles. It was almost like the eye of the storm – we made it through the harrowing illness of Alexis and Josslyn last week while we prep for the impending disaster coming to town next week. This week was all about the set up – who will be out of town (Spinelli, Kristina, Trey, Liz, Anna) and who is her (Jax!) Here’s hoping there are still plenty if surprises to come.

Josslyn’s acting chops:
Hate to keep harping on this topic, but this poor little girl is really out of her element. The best was this week when Johnny came in and asked how she was. She just stared back at him until Carly jumped in with a cover about how she just woke up from a nap. It might be time for some serious age progression on this character. Anyone else notice how much she lit up in scenes with Jax however? It must be those blue eyes!

Todd and Luke:
Before Luke left to to hunt down Slim, he ran into Todd – his machete-wielding savior from the shack. Sharp as ever, Luke took notice of his shoes, pretty much the only identifier he has to Todd. One mystery at a time however, and Anna needs his help finding Robin in Switzerland. The people of Port Charles have so much work to do!

Todd and Kate:
It’s about time Todd figured out a way to get at Johnny without going back on his agreement with him. What can Johnny do if Kate remembers all on her own that he is the one who shot out the tires and Connie took the fall. All she needs is a nudge in the right direction, and it could be Todd will provide more than enough clues to lead her there.

Abs and couch surfing:
It must have been no-shirt Friday in Port Charles. Jax, Todd, Ewen, Joe Jr. – all shirtless. Poor Johnny didn’t get the memo. It must have been stuck on the back of the message Carly left him telling him that Jax was spending the night. Meanwhile, Liz and Carly both defended their sleepover dates because they “just slept on the couch.” Mature.

Olivia’s visions:
We’ve got a psychic in the house! This week Olivia not only saw the impending danger in the form of a glass of toxic water, but she also saw Ewen as the devil. Too bad that little admission could be earning her a one-way ticket to Shadybrook. It will be worth the price of admission if the Falconeri girls get back to their Brooklyn roots and team up on Ewen once they learn all about who he really is.

Tracy’s taste in men:
Whether emotionally, physically or psychologically, Tracy has a habit of choosing men who are unavailable. Joe Jr. might be despicable, but loved that Tracy and him just went at it upon second meeting. They were around each other, what 3 minutes tops? No need to pine after Luke when there is a big and brooding mobster right there, willing and able. And, it will be nice for her to have someone to cling to as the end seems near. What do you think about these two? Let us know in our General Hospital Poll: Tracy and Joe. Jr. Me? I think there could be a future for these two, and it could possibly make him a much more likable character to see him spar with Spanky.

Sam and John:
We just got a few brief moments of these two this week, but it was enough to confirm that the kiss these two shared weeks ago is very much on both of their minds. John couldn't tell Natalie that his kiss with Sam didn't mean anything, because it did. Glad to see they are going to talk about this. Let's hope they actually do. I can't stand when couples dance around an issue. Jason and Sam didn't talk about what they needed to and look where they are now.

Trey/Kristina/Michael/Starr:
Okay, let me begin by saying I was starting to like Starr. But her near-badgering of Trey to pry his secret from him, just to turn around and tell Michael was horrible! Don't get me wrong - I am glad she told Michael because he has the common sense to smell a rat and it won't be long before Trey and Joe's connection is revealed. I was actually shocked when she didn't tell Johnny though.

Carly's men:
Johnny's a goner. Seriously, this a battle between Jax and Todd. Jax is wonderful, but so is the banter and chemistry between her and Todd. Wouldn't it be fun to see Todd and and Jax square off? Good stuff!

Jerry's plan:
Things are about to get real in Port Charles when everyone realizes what Jerry has done. One thing I know for sure is that a disaster of this magnitude is going to heighten every emotion, every response, every relationship. And with that in mind, I know next week is going to be explosive. Relationships could be formed where we never saw them before and others could be broken apart. I can't wait!

Jonesing for an eyeful of swimmer Ryan Lochte's abs? Get what you need in Soap Opera Fan's Star Gazing, and find out who Rhianna still cares about in Soaps.com's Celebrity Gossip. Plus, don't forget to catch up on Pretty Little Liars recaps before next week's final!