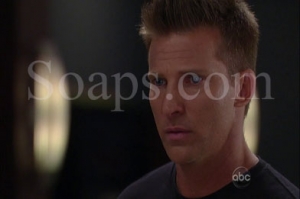 We love reading what readers have to say about our favorite characters in Port Charles, so we have gathered together some of the emails we’ve received this week. Agree or disagree? Let us know in the comments.

Emily says, I’ve been watching “GH” since before Jason had his accident, and he was with Robin. If the storyline continues the way it’s going now I’ll probably never watch it again. Sam and Jason are good together. I stopped watching for a while when they broke up and he was with Liz. I’m hoping they’ll hurry up and have them find out that the baby is alive and Jason is the father.

J says, The direction “General Hospital” is going in is terrific! Having Jerry come back is great. Hopefully Jax will be back too. The mystery around Robin is good as well. Keep it up!

Lyn says, If we wanted to see a failed soap, we’d still be watching it and it wouldn’t have been canceled. Get rid of them [the “OLTL” actors] and go back to writing for the “GH” cast.

Wendy has a complaint, To whom it may concern, I need to put in a complaint about what is going on with the sad choice someone made on keeping one soap - being "General Hospital" - with a bunch of rejects from other long gone soaps! This is a terrible idea. My mother has been watching for as long as she can remember and she is 79 years old and she is staying confused along with me. We know or knew the original cast but this show now looks like a cluster of madness. Hope you do the right thing and put it back the way it was or you will continue to lose valuable fans.

Crystal says, I have watched "GH" for over 22 years. I dearly love the show. But, the new Josslyn is terrible. She is so unbelievable. She doesn't talk and does not know how to act. For the first time ... I think to myself, can't you find any other blonde haired little girl? Did you get her for free? Please, find someone who is comfortable in the role of acting.

Find out who gets kissed on "Grimm," in Soaps.com's Primetime Spoilers. And keep up with "PLL" with the Pretty Little Liars recaps each week.

Join Soaps.com on Twitter @soapoperafan, "like" Soaps.com on Facebook to dish on "General Hospital," all the other soap operas, "Dallas," "Glee," "Grey’s Anatomy," "Vampire Diaries," and "Venice The Series."