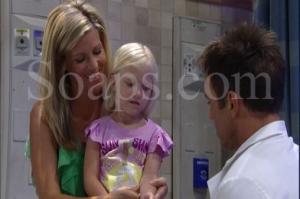 I guess the writers at “GH” have decided to just let it roll, as more intriguing storylines pile up, old ones are still waiting to be resolved and the tension builds greater every day. Even with most of the action revolving around the hospital this week, I was pretty riveted.

Baby love:
Dante and Lulu are having a baby! What better way to put the strength of their relationship to the test, right? I mean, it was just last week that Lulu was worried she doesn’t have what it takes to make something forever with Dante despite loving him. Well, there is nothing more forever than a baby! Dante’s doting was adorable though, and it is great news in a week that is about to bring on the tears.

Sonny’s proposal:
Could it be third time’s a charm with these two? Things are about to get rocky regardless considering they both mistakenly think she is fully integrated with Connie. Her late-night visit to Johnny proves that. Besides, Ewen is so involved with Jerry there is no way he can even think straight enough to help someone with mental problems. Joe’s end-of-the-week release is also going to be a big obstacle to their happiness. At least they got to enjoy a few happily engaged moments before Jerry Jacks really hits the fan.

Mystery shot:
As sick as Alexis and Joss got from Jerry’s injections, it was hard to imagine why he would do it to the only two people he really cares about in Port Charles. Literally, it wasn’t until he pulled out the vials did I really start to piece it together. Good thing he spelled out his plan to Joe on Friday about unleashing an illness on the town so I could get fully on board.

Speaking of Joe and Jerry, how the heck did Jerry get Joe out of prison so easily? I mean, he was only being held for murdering the sister of a federal agent. No biggie. There is more to this story for sure. Joe is a big bad dude, and I don’t think anyone should underestimate his capability for evil – especially now that we know he supplied to muscle for the Metro Court hostage disaster. And Jerry should watch his back once Joe realizes Trey is in danger.

Morgan & McBain:
is it just me, or could this be a partnership for the ages? Jason, the bad boy mobster teams up with straight-laced McBain. Both are surly and sarcastic and the Sam-based tension really ups the ante. No matter who Sam chooses in the end, I am all for this pairing for the long haul. I love how they both latched onto Ewen’s nervousness and gave him just enough rope to hang himself at Wyndemere. In fact, the walls seem to be closing pretty fast on Ewen and they should all come crumbling down soon. But who figures it out first? Be sure to vote in our GH Poll: Ewen’s Lies.

Water works:
I am not ashamed to admit I squeezed out a few tears this week, leading up to straight-up bawling by Friday. Starr was amazing as a grieving mother watching Joss struggle with her illness. The scene with Liz and Carly sitting over Joss' bed also got me a little. They did not have to really say anything at all in the brief scene and I was able to relive Liz's pain of losing Jake and Carly's joy at saving Joss, with both of their fear about what is happening now. Great moment between two professionals.

Kudos as well to Molly, whose reaction to seeing her mom sick in the hospital had me blubbering like crazy. From her all-too-realistic horror at making fun of her mom while she was laying in the hospital to asking the doctor if she was going to get better, she was great. I'm hoping this experience will shake some maturity into her moving forward. That, with the recast of TJ, and maybe I could handle more Molly screen time.

Child actors:
Wow, was there ever such a contrast in acting between little Emma and Joss this week. Emma's scene with Patrick upon his release from rehab (another teary moment for me) was so good, while Joss is always kind of - stoic. Quiet. However, this all served her well for her big scene on Friday, and when she was kind of cringing in pain from the fever, I gave her a little mental high five.